There Can Be No Differentiation Among Terrorists: India Tells China 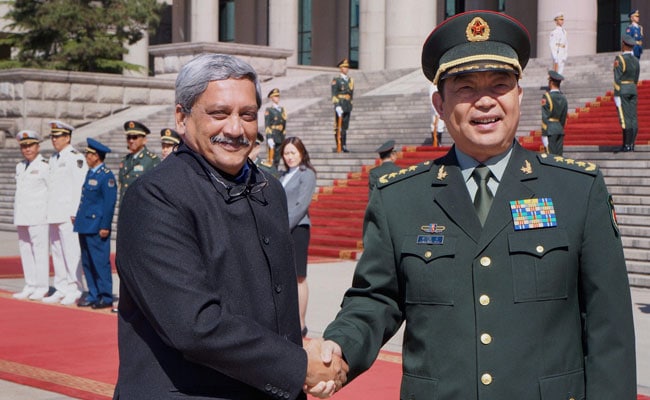 Manohar Parrikar said that India did not shy away from expressing its concerns to China in a clear and firm manner.

New Delhi: After concluding a five-day China visit, Defence Minister Manohar Parrikar today said that there cannot be differentiation among terrorists, adding that the message was clear to Beijing which had blocked India's bid to have Pathankot terror attack mastermind Masood Azhar banned by the UN.

"I have expressed very clearly to them that there cannot be differentiation in terrorists. All terrorists are the same and they should be dealt with the same principle, including the issue they had obstructed at the UN. They should also deal with it in the same manner," he told reporters.

Mr Parrikar during his visit also raised India's concerns about the presence of Chinese troops in Pakistan-occupied Kashmir (PoK), besides discussing crucial matters like boundary issues and setting up of a military hotline between DGMOs (Director Generals of Military Operations) of the two countries.

He underlined that External Affairs Minister Sushma Swaraj had raised the issue in a more detailed manner in her interaction with her Chinese counterpart Wang Yi. Earlier this month, China had stopped UN sanctions committee from designating JeM chief Azhar as terrorist, maintaining that the case "did not meet the requirements" of the Security Council.

Mr Parrikar said that India did not shy away from expressing its concerns to China in a clear and firm manner. "Issue was also raised and India's concerns were presented in a clear manner. May be for the first time, it was raised clearly and firmly. Of course, they have their own justification...We did not shy away from raising our issues," he said.

He said the most important takeaways from the trip were the joint decision for continuous interaction, exchanges, more talks between the armed services of both countries so that there are reduced chances of any "unwanted, undesirable" incident happening.

Mr Parrikar said that an "improved" version of the MoU on Defence, signed in May 2006, is being exchanged for finalisation.

Asked if China had raised the issue of India's decision to sign a logistics agreement with the US, Mr Parrikar said, "Yes."

"They mentioned it but not with the intensity as some of the media was thinking. They definitely mentioned it and we have been very clear that India's stand on various foreign policies, including this one, is an autonomous stand and India takes these decisions based on strategic and security interest of the country," the minister said.