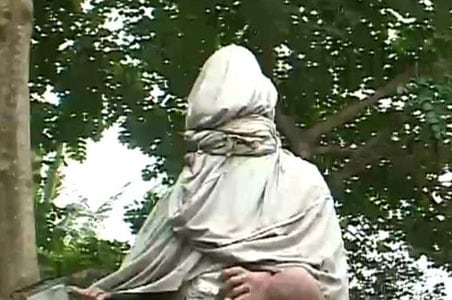 Tamil Nadu Chief Minister M Karunanidhi will unveil a statue of the Tamil poet Thiruvalluvar in Bangalore next weekend - 18 years after it was installed.

In a reciprocal gesture, a statue of the Kannada writer Sarvagnya will be unveiled in Tamil Nadu, but not everybody is happy over this much-delayed move.

The statue was to have been unveiled back in 1991 by the then chief minister S Bangarappa, but that was the year of violence between Karnataka and Tamil Nadu over the sharing of Cauvery waters. And the statue was put under wraps. There is relief that it will finally see the light of day.

"The sorrow I felt until my daughter's wedding was fixed - and then the relief that comes once it is fixed - the same relief a parent feels. I feel now that this statue is going to be unveiled," said Punyamurthy, a resident.

"Not only I, all the Tamil people know that the statue is opening on the 9th. Because we have been waiting for a long time for them to open the statue," said Selvi, another resident.

But not everybody is rejoicing over the news. Some Kannada organisations say the statue should remain out of sight and have called for a bundh on the day of the unveiling.

"We are opposing the unveiling of the Thiruvalluvar statue - to start with the Tamil Nadu and Karnataka government should stop the Hogenakkal project. It is happening inside Karnataka. Karunanidhi should talk with Karnataka over sharing of Cauvery waters," said Praveen Shetty, member, Kannada Rakshana Vedike.

The Karnataka government says nothing will stop the unveiling ceremony.

"It will be there at any cost. We are not going to change the date or anything. We will convince our friends. I have got full confidence," said Karnataka Chief Minister B S Yeddyurappa.

The covering over the statue for 18 long years is a visible symbol of the tension between Karnataka and Tamil Nadu. In the interest of peace, it is hoped that the unveiling of this statue here, and that of the Kannada writer Sarvagnya in Tamil Nadu, will be a symbol of a different kind - the beginning of peaceful coexistence.