Sourav Ganguly is slated to be the next chief of BCCI 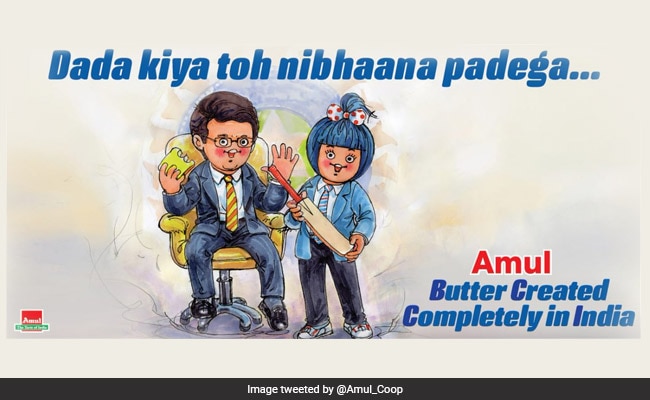 As many people continue to celebrate former India skipper, Sourav Ganguly, becoming the new BCCI President, Amul India has dedicated a doodle to congratulate the ex-skipper, calling him ''The new President-elect''.

The brand, known for its creative and quirky cartoon posters, revealed its latest doodle featuring Ganguly alongside the iconic Amul girl.

On Wednesday, Amul shared a sketch of Ganguly sitting on a chair in their ad with the caption, "#Amul Topical: The new President-elect of our cricket board." The creative itself refers to Ganguly as he is affectionately known to fans and friends - Dada.

#Amul Topical: The new President-elect of our cricket board! pic.twitter.com/gbdp5QVH3o

"Brilliant," wrote one person praising it. "Amul never fails to bring smile on your face," said another.

After filing the nomination for the post of President, Ganguly on Monday had said, "It is a very important time in Indian cricket administration".

"It is a very important time in the Indian cricket administration because of all that's happened in the last three years. To be in a position where I can make a difference along with the team would be extremely satisfying. Hopefully, in the next few months we can put everything in place and bring back normalcy in Indian cricket," Ganguly had told reporters.

Ganguly, however, will be able to serve as BCCI President only until September 2020. He has been holding posts in the Cricket Association of Bengal (CAB) for the past five years where he currently serves as President. An administrator can only serve six years on the trot.

When asked about the priorities after winning the BCCI elections, Ganguly said: "For me, my biggest focus will be first-class cricket. I have been very vocal about looking after first-class players especially the amount of time they give to cricket because that's your base and strength. I have written many a time in the last three years that enumerations need to increase many folds so that is going to be my first priority."

The BCCI elections are scheduled to be held on October 23 but with Ganguly being the only candidate to file his nomination for the top post of Indian cricket, he is set to be elected unopposed.