The Many Shades Of Jantar Mantar, India's 'Protest Square'

Jantar Mantar, the country's resistance square, has them all, and more- army veterans demanding 'One Rank One Pension' (OROP), farmers from Tamil Nadu clad in green loincloths raging against the State and followers of at least two controversial self-styled god men, currently behind bars. 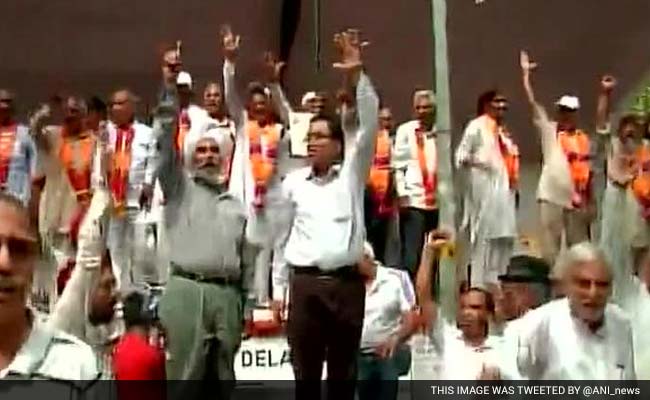 New Delhi: One calls himself the 'father' of MNREGA, the other a 'one-man army' railing against the system, while yet another has been shooting off letters against corruption to ministers and bureaucrats for over a decade.

Jantar Mantar, the country's resistance square, has them all, and more- army veterans demanding 'One Rank One Pension' (OROP), farmers from Tamil Nadu clad in green loincloths raging against the State and followers of at least two controversial self-styled god men, currently behind bars.

Here, some do stand out for their eccentricities and outlandish ideas, but a stroll down the road that connects Sansad Marg and Ashoka Road in the heart of the national capital reveals that not all the causes are frivolous.

A day after the Green Court banned all protests and dharnas in the area on grounds of pollution, the protest hot spot appeared to be going about business as usual, but a sense of uncertainty, anger and agony was all too palpable- uncertainty on the future of their demonstrations, anger against the "unfair" Green Court order, agony over the establishment "not willing" to lend them an ear.

"Ramlila Maidan does not even have a tree. Here at least we get some shade. It's not that we are treated very well here. Officials from the corporation routinely take our blankets and other things away," said Mr Sunil Gore, a farmer from Madhya Pradesh who has been on a dharna since July 3 demanding a fair Minimum Support Price (MSP) for crops.

The farmers from Tamil Nadu, who has been camping here for nearly three months, said they may move the court against the decision of the Green Court.

The leader of the OROP movement Major General Satbir Singh (Retd) slammed the order as "unfair", saying it amounted to throttling free speech.

There are three hospitals over there (at Ramlila). Do they want that place to be utilised like that? We are beseeching the conscience of the government. It is a surprising decision. It is patently unfair," Mr Singh said.

The shopkeepers in the area appeared divided on the issue. While some rejoiced at the prospect of "some semblance of order", others lamented that they were staring at losses and possible closure.

"See, it may appear that we do brisk business whenever there are protests but on the contrary we suffer losses. The police puts up barricades and restrict movements in the area which does not really help. And the protesters from near and far prefer to eat at the nearby Gurdwara rather than shelling out money," said a shopkeeper, who has been doing business in the Central Delhi neighbourhood since 1992.

But Vishnu, who runs a mini grocery store of sorts, disagreed. His business, along with that of three others adjoining his shop, depends entirely on protesters, he said.

Ankit, a water vendor, believes opening up the street to public transport will help. "If buses start running and passenger shelters are put up, there will be an uptick in sales," he said.

Jantar Mantar, named after a nearby astronomical observatory built by Maharajah Sawaii Jai Singh II of Jaipur, emerged as the protest square after the government banned demonstrations at the Boat Club area near Rajpath in the late '80s.

The proximity to seats of power like the Parliament, North Block, South Block and a number of ministries, and good connectivity from all parts of the city added to the site's popularity.

Meanwhile, there has been no communication from the authorities, the police or the New Delhi Municipal Council regarding the ban, said Shyamlal Bharti, who left his family behind in Uttar Pradesh's Pratapgarh to get official acknowledgment of the "fact that he conceptualised MNREGA".

Mr Suryawanshi, who hails from Maharashtra's Latur, says his movement is against the all-pervasive corruption. In his spare time, he doubles up as a writer of letters or petitions for others who flock to him for help.

Promoted
Listen to the latest songs, only on JioSaavn.com
Mr Singh, who claims to have served the Uttarakhand Police at some point, says his "one man struggle" is to get justice for two youths of an indigenous tribe of the hill state who were jailed "wrongfully" in 2005.

"Idhar, hum zameen mai sote hai, aasman ko orke, hume kis baat ka dar ya pareshaani. (Here we sleep on the ground, embracing the sky, what will we be worried or scared about)."