Thaw on Narendra Modi does not mean rethink on visa, says US 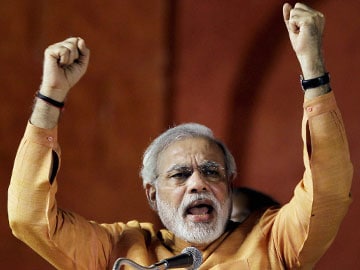 Washington: US today scotched speculation that Thursday's meeting between its Ambassador Nancy Powell and Narendra Modi would lead to lifting of the visa ban on BJP's prime ministerial candidate, insisting there was no change in its nine-year old policy that came in the aftermath of 2002 Gujarat riots.

"When individuals apply for a visa, their applications are reviewed in accordance with US law and policy. This is not a reflection of any change...This is simply a meeting happening on the ground in India. It's not a reflection of anything else than outreach to a broad range of officials," State Department spokesperson Jen Psaki told reporters.

Mr Modi's visa was revoked in 2005 under the provisions of a domestic law on the issue of "severe violations of religious freedom".

In a sudden U-turn, the US yesterday signalled the end of its boycott of Mr Modi when it sought and got permission for a meeting between Ms Powell and Mr Modi in Ahmedabad on Thursday.

The State Department sought to play down Ms Powell's meeting with Mr Modi, saying it is part of increased engagement with Indian leaders and indicated that President Barack Obama may not have been involved in the decision to end the BJP leader's boycott.

Washington also made it clear that it was not taking any position on the upcoming Lok Sabha elections.

Justifying the meeting, Ms Psaki said all relevant people required to take a decision were involved in the process.

However, Ms Psaki did not confirm if President Obama or Secretary of State John Kerry were involved in it.

"These decisions don't always rise up to every highest level. But certainly, all relevant individuals who needed to weigh in weighed in, and agreed that it was certainly an appropriate meeting to have," Ms Psaki told reporters.

"We are often engaged in concentrated outreach to senior political and business leaders. We began doing that months ago, if not years ago - in different scales, of course - to highlight and continue our US-India relationship. There has been no change in our policy per se. This is an effort in that engagement," Ms Psaki said.

Responding to questions, Ms Psaki refuted suggestions that the decision of the administration was influenced by lobbying efforts of some pro-Modi groups and the business community in the US.

She said it was certainly not a reflection of anything changing regarding America's longstanding and strong advocacy for human rights around the world.

Promoted
Listen to the latest songs, only on JioSaavn.com
"We do broad outreach with a range of officials in India and many countries around the world with different backgrounds. And it's simply just an example of that. We don't take positions. So no, it wouldn't be a reflection of that. It is just a reflection, as I've stated a few times, of us reaching out to a range of individuals from different backgrounds, different political affiliations, which we do in countries around the world," she said.