KCR's Meetings With Opposition Leaders Might Have An Immediate Agenda

While many speculate KCR is eying the 2024 general elections, his frequent meetings with prominent opposition leaders might be for a more immediate plan. 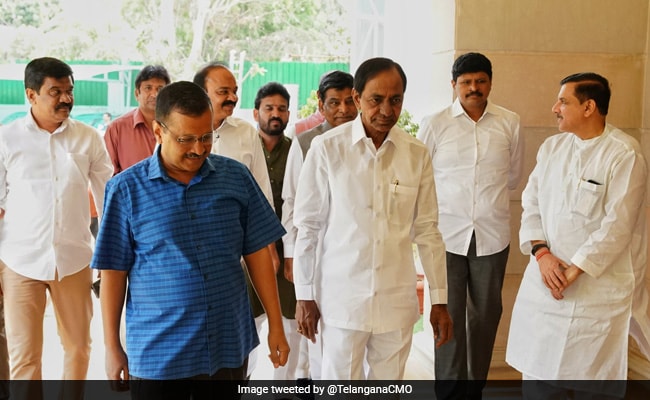 Even as Telangana Chief Minister K Chandrashekar Rao is on a national political tour to meet like-minded parties and leaders ahead of the 2024 national elections, his immediate sights are set on the presidential polls in July. He would like the opposition parties to field a joint candidate.

KCR, as he is popularly known, has already met Samajwadi Party leader Akhilesh Yadav and Delhi Chief Minister and Aam Aadmi Party convenor Arvind Kejriwal and is said to have discussed the strategy for the presidential poll.

There seems, however, to be no attempt to reach out to Congress. Senior Telangana Rashtra Samithi leaders say the Congress could choose to back the candidate agreed upon by the other parties to challenge the BJP candidate.

Interestingly, KCR intends to meet both Bihar chief minister Nitish Kumar and opposition leader Tejashwi Yadav, who had earlier travelled to Hyderabad to meet with KCR in Hyderabad.

KCR is also likely to reach out to Odisha Chief Minister Naveen Patnaik, whose support could be crucial. He had earlier travelled to Bhubaneswar to meet with him.

There is no indication of KCR reaching out to Andhra Pradesh Chief Minister Jagan Mohan Reddy though.

The BJP-led NDA is said to be short of 9,194 votes to win the presidential election on its own. Both the YSR Congress and the Biju Janata Dal may be critical for a win.

In 2017, not just Yuvajana Shramika Rythu Congress Party (YSRCP) and BJD but the TRS and Telugu Desam Party had also backed the NDA candidate. If a common joint opposition candidate is put up, they would need the backing of all these parties to have a fighting chance.