Governor Tamilisai Soundararajan says "highest office should be respected", while Telangana government has not yet responded to her allegations 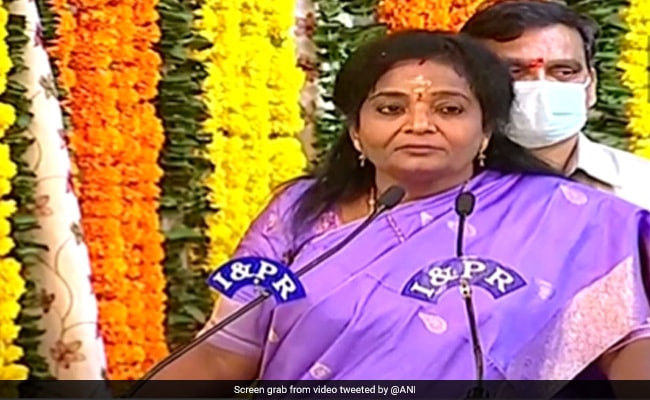 Governor Tamilisai Soundararajan at a public function as she completed three years in office today.

Telangana Governor Tamilisai Soundararajan today cited a number of instances to allege that the state government is discriminating against her because she's a woman. She listed not getting the government helicopter as an example, and being "denied" the Governor's Address and hoisting of the flag on Republic Day.

"Whenever I wanted to reach out to the people, definitely there was some hurdle," she said, addressing at a public function as she completed three years in office. "The state will write in its history how a woman governor was discriminated against."

Neither the Telangana Rashtra Samiti (TRS) nor its government — led by K Chandrasekhar Rao ('KCR') — has responded to her allegations.

A political angle is being spotted, too, as Ms Soundararajan is a former chief of Tamil Nadu BJP. The BJP-led Centre and the TRS government have snapped at each other frequently over the past few months as Chief Minister KCR works to bind the Opposition to challenge PM Narendra Modi in 2024.

#WATCH | Telangana Gov Tamilisai Soundararajan says, "...The state will write history how a woman Governor was discriminated. I was denied the Governor's Address&the hosting of the flag on Republic Day. Even now wherever I go protocol isn't followed. Office should be respected.." pic.twitter.com/Bb39hXW6Ux

Governor Soundararajan, speaking on her equation with the state government, recalled a situation when she was to got for a tribal festival in Mulugu district. "I needed to go the Sammakka Sarakka (Jatara), so had asked the government for a helicopter because the road journey would take eight hours... Till the last minute, we were not informed whether they will give the helicopter or not. We left the next morning by car." She said she barely made it in time as the main festival was to be over by 4pm.

"I am telling this not to pinpoint somebody," she said, "But the highest office should be respected."

"This is not the only incident. I was denied the Governor's Address. I was denied the hosting of the flag on Republic Day," she added. "Even now, wherever I go, protocol is totally not followed. The Collector doesn't come and greet. I am not bothered, but the office should be respected."

She said discrimination has "not halted this woman". "I work more than men. I do not want anything because of any allotment or reservation because I am a woman. But we all respect womanhood."

She said she now travels, "wherever I can", by car or train.