After 3 Defeats, BJP Candidate Is Fourth-Time Lucky In Telangana By-Poll

Telangana Chief Electoral Officer Shashank Goel has said votes in four EVMs have not been counted due to technical problems, but that may not change the result of the bypoll. 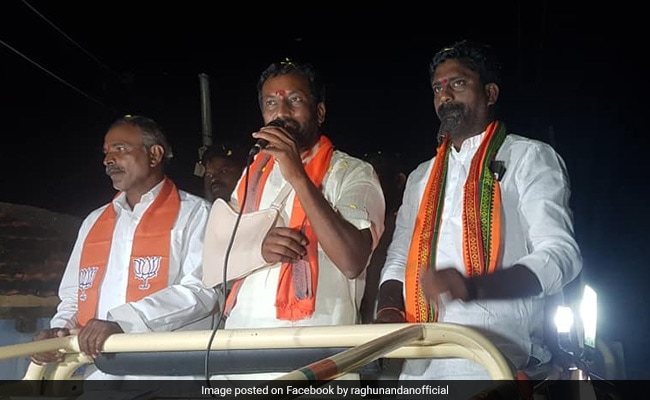 From the word go, the BJP's Raghunandan Rao stayed the frontrunner in multiple rounds of counting. The Telangana Rashtra Samithi candidate Solipeta Sujatha took the lead for the first time only by the 19th round, by about 250 votes. Even that did not last. Mr Rao tasted victory today after three consecutive defeats in the constituency.

Telangana Chief Electoral Officer Shashank Goel has said votes in four EVMs have not been counted due to technical problems, but that may not change the result of the bypoll.

Conceding defeat, TRS working president KT Rama Rao said this should be a wake-up call for party leaders not to be complacent about the party's position in the state.

Municipal elections are due in Hyderabad in a couple of months and the BJP would hope to take the momentum from Dubbak victory to the battle in Hyderabad.

Dubbak had become a high-stakes battle for all three main political parties in the fight. The TRS had put up the widow of the sitting MLA, Solipeta Ramalinga Reddy, whose death had made the bypoll necessary. Finance minister Harish Rao, who is also the Chief Minister's nephew, was the chief strategist for the party in the bypoll.

The BJP had put up Raghunandan Rao even though he lost the assembly elections in 2014 and 2018 and also the 2019 Lok Sabha election from here. With a new state party chief in Bandi Sanjay, Karimnagar MP, the BJP seemed to put its full strength to win this one.

In the run-up to the election, there were multiple seizures of huge amounts of cash that were linked to the BJP candidate, even though the TRS claimed the BJP candidate would lose his deposit.

Dubbak has high-profile constituencies for neighbours. Medak is represented by Chief Minister K Chandrashekar Rao, Sircilla by his son and municipal administration minister KT Rama Rao and Siddipet by Harish Rao. The opposition parties told voters was that while these neighbouring constituencies were pampered, Dubbaka had been neglected.

This is the second MLA segment for the BJP in Telangana. The only other seat represented by BJP's Raja Singh in Goshamahal. The party has four MPs in the state from Secunderabad, Nizamabad, Karimnagar and Adilabad

The Congress candidate was Ch Srinivas Reddy, son of Ch Muthyam Reddy who had represented Dubbak after the 2009 elections.

The party, which put Manickam Tagore recently in charge of Telangana, had also hoped Dubbak would serve as a turning point for the party, which has been on a downswing ever since 2014. But that was not to be.