BJP accuses state's ruling Telangana Rashtra Samithi of using the police to influence the November 3 bypolls after Rs 18.67 lakh cash was seized from the house of a close relative of the BJP candidate. 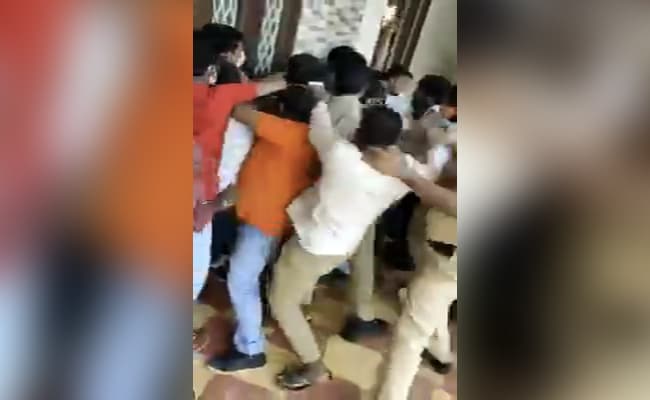 Over Rs 18 lakh seized by the police from the relative of a BJP candidate in Telangana ahead of the November 3 bypoll led to chaotic scenes on Monday as men believed to be BJP workers were caught on camera trying to snatch the cash from policemen.

The police said they raided three locations based on a specific tip-off and seized Rs 18.67 lakh from the home of a relative of M Raghunandan Rao - the BJP candidate for bypolls in the Dubbak constituency in Siddipet district. The money, they alleged, was meant for use during the bypolls.

"The police went with an executive magistrate to raid the house of Surabhi Anjan Rao. The amount of money seized has been mentioned on a document, which Mr Rao's relative has signed. He told the executive magistrate that the money was given to him by his brother-in-law Jitender Rao who told him to give small amounts to people on his instruction, and that it is meant for the Dubbak bypoll," Siddipet commissioner Joel Davis told NDTV.

According to the police, on hearing about the raid, some 250 BJP workers, including Raghunandan Rao, gathered outside the house. When the police was leaving they attacked a constable carrying the seized cash in a bag, snatched a large chunk of it and fled, the police said.

"We have filed two cases; one for undue influence and attempt to bribe, and a second case for attacking the police and obstructing their work. Five people have been arrested. Over 12 lakh in cash is still to be accounted for. The remaining Rs 5.87 lakh was seized by the executive magistrate," the Commissioner said.

The BJP, however, has accused the police of planting the money there and beating up its party workers.

Mr Rao has denied that the money was found at his relative's house, and has, in turn, accused the police of threatening him.

"My vehicle has been searched for 20 times, my house has been searched. I cooperated with the officials during raids but when I asked them to show a legal notice, they started threatening me. They showed no search warrant," the BJP's Dubbak bypoll candidate said.

Mr Kumar, who tried to reach Dubbak from Karimnagar - 100 km away - was stopped and temporarily detained by the police, who felt that his arrival could lead to a law and order situation.

Within hours, BJP MP and Union Minister of State for Home Kishan Reddy reached Dubbak, and accused the state's ruling party - Telangana Rashtra Samithi - of using the police to influence the bypolls.

"The brutal force used by the police to barge into the house (of Mr Rao's relative) and the way our candidate's wife and family were treated is unbecoming and condemnable... Never have I seen any ruling party abuse state machinery like I see today," he said.

The BJP has also complained to the Election Commission about the alleged misuse of the district administration.

However, Telangana Finance Minister Harish Rao - in-charge of TRS campaign for the Dubbak bypoll - has said this was a case of the BJP trying to turn the tables after being caught red-handed. "This is like when a thief is caught, and he starts raising an alarm," said Harish Rao, who is also the Siddipet MLA.

The incident has turned the Dubbak bypolls into a high-stakes election, especially ahead of the municipal elections in Hyderabad.