Tejasvi Surya's allegations of a corruption scandal in allocation of hospital beds in Bengaluru were laced with anti-Muslim comments by other BJP MLAs. 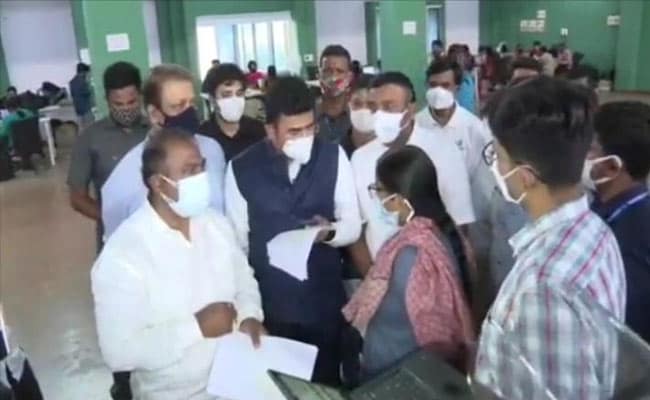 Tejasvi Surya made the charges of corruption earlier this week. (File)

BJP MP Tejasvi Surya has denied reports that he apologised to those working at a municipal COVID-19 war room in Bengaluru, after his allegations of what he called a "bed-blocking scandal" at his own party-controlled civic body took a communal turn.

"When one has no news, they create fake news," his office posted on Twitter, responding to two news reports that said he apologised to the 200 employees at the facility during a visit on Thursday evening. His account was contradicted by those present at the war room at the time.

Mr Surya had visited the facility on Tuesday and broadcast the video live, reading out the names of 17 Muslim employees who he accused of corruption in the allocation of hospital beds as the city and Karnataka struggles with a massive spike in COVID-19 infections.

A video of the incident showed the Bangalore South MP in the municipal Covid war room with three BJP MLAs, grilling officials. One of the MLAs, his uncle Ravi Subramanya is heard shouting, "Have you appointed them for the madrassa or the Corporation?"

Later, there is more offensive profiling from an MLA who said to a woman official, "Who is this person, Madam? How can he appoint 17 members like a Haj committee?"

Mr Surya says, "How did you choose them?" Then he adds that he is questioning only the qualifications of the man who made the selection.

After Tuesday's incident, names, phone numbers and addresses of the workers were spread on WhatsApp and social media from BJP-linked accounts with the caption: "List of people working in the BBMP War Room killing thousands of Bengalurians".

The incident has led to scores of the people who work in the war room facing harassment, including sexual harassment, according to reports. Some have reportedly had people showing up at their homes asking for hospital beds.

On Wednesday, searches were carried out by the police at the city corporation's war rooms. The police said they are also investigating the hospitals where four people were arrested for allegedly blocking beds with fake names for COVID-19 patients paying bribes. Seven people have been arrested in the case so far.