Tejashwi Yadav's Critics Will Be "Khamosh-ed" On November 10: Shatrughan Sinha

Bihar Election: The "grand success of the grand alliance" is inevitable, Shatrughan Sinha said, adding that Tejashwi Yadav and Rahul Gandhi had generated "euphoria" among the youth. 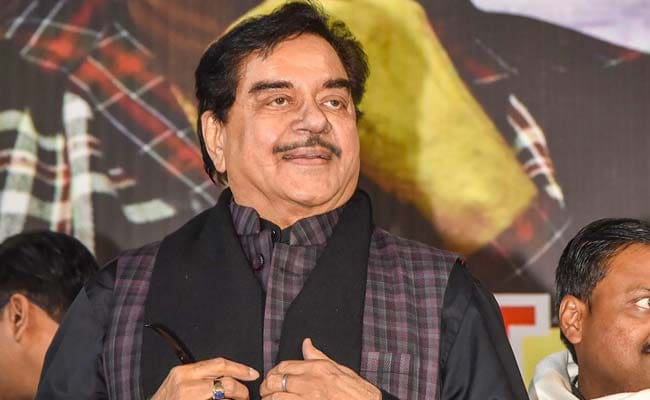 Opposition leader Tejashwi Yadav's critics will be "khamosh-ed" (silenced) by his landslide victory when the Bihar election results are declared on November 10, actor-politician Shatrughan Sinha said on Tuesday.

The Congress leader, whose son Luv Sinha is a party candidate in the polls, said Chief Minister Nitish Kumar, the BJP and other leaders of the National Democratic Alliance (NDA) were attacking Tejashwi Yadav as they were totally rattled by his promise of 10 lakh government jobs.

''The writing on the wall is absolutely clear, the youth brigade led by our very own, dynamic, most talked-about man of aspirations and expectations, Tejashwi Yadav is going to form the government with a massive landslide victory of the RJD, the Congress and the Left parties," Shatrughan Sinha told Press Trust of India.

On Nitish Kumar's criticism that Tejashwi Yadav is inexperienced, the 72-year-old used his most-quoted movie one-liner and said: "The critics will be totally 'Khamosh-ed' on the day of the election results on November 10."

Mr Sinha said the "grand success of the grand alliance" is inevitable, and added that Tejashwi Yadav and Congress leader Rahul Gandhi had generated "euphoria" among the youth.

His son Luv Sinha, who failed to make a mark in Bollywood, is the Congress candidate from Bankipore constituency in Patna, where he faces the BJP's three-time MLA Nitin Navin. The constituency voted today in the second round of the Bihar election.

The former Union Minister quit the BJP, his party of nearly two decades, and crossed over to the Congress just before last year's national election. He had been denied a ticket from his two-time constituency Patna Sahib. He later contested as a Congress candidate and lost to the BJP's Ravi Shankar Prasad.

Mr Sinha said while he counted Prime Minister Narendra Modi as "a friend" and the guardian of the nation, he had not once talked about Bihar's needs. He criticised PM Modi for using terms like "jungle raj ka yuvraj (crown prince of jungle rule)" for Tejashwi.

"If someone used such language for him, how would he feel? In Bihar he is talking about China, triple talaq, Article 370, when he should be talking about development, education, health, unemployment, jobs and farmers," said the veteran politician.

"They (NDA) are totally rattled and the announcement (of 10 lakh jobs) has created a euphoria. This is a well-thought out announcement, it is also well researched and made after consulting intellectuals and experts," he added.

On Tejashwi Yadav's father and RJD founder Lalu Yadav, who is missing his first state election as he serves a jail sentence for corruption, Mr Sinha said: "We hope, wish and pray that we are able to live up to this slogan -- Jail ka phatak tootega, Lalu Yadav chhootega (the prison doors will break down and Lalu Yadav will be set free)."