"I'm The Son Of A Lion," Tejashwi Yadav Warns "BJP Goons" In Tweet

Today, Tejashwi Yadav's tweet, Bollywood style, read: "Listen, BJP goons - I am a son of lion. I am the son of Bihar. I am not going to get scared by your antics." 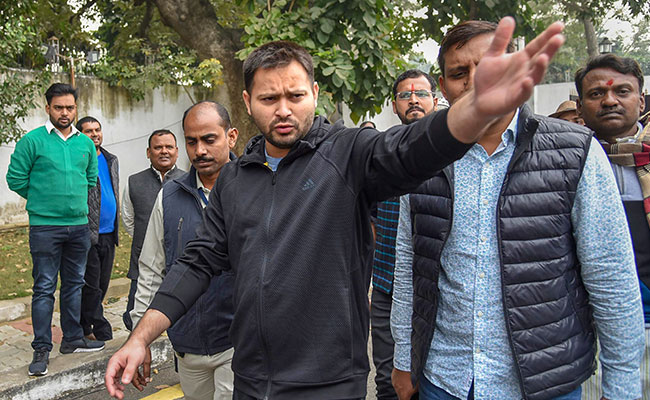 Tejashwi Yadav has been regularly bashing Nitish Kumar and the BJP

Bihar leader Lalu Yadav's son Tejashwi Yadav today issued a challenge to the BJP, demanding that they confront him and have a straight fight instead of taking cover. The young leader of the Rashtriya Janata Dal has been livid about not being allowed to meet his father in jail. Lalu Yadav, he had tweeted yesterday, was also not being provided medical help.

Today, Tejashwi Yadav's tweet, Bollywood style, read: "Listen, BJP goons - I am a son of lion. I am the son of Bihar. I am not going to get scared by your antics. Why are you taking cover like cowards... come let's have a straight fight and prove that you drank your mother's milk."

The 29-year-old, who was the Deputy Chief Minister of Bihar in the Grand Alliance government, has been routinely baiting Nitish Kumar, his former boss and his new ally, the BJP. Taunts have been flying on Twitter - most of which have gone unanswered by the other side.

This morning, in a tweet, he said: "I have been waiting since yesterday evening at the Ranchi hospital to meet my father, but the dictatorial BJP government is not allowing a son to meet his father".

"They are conspiring against Lalu ji. He is under police custody but raids are being conducted constantly at the hospital room where he is undergoing treatment," he told reporters in Patna.

Convicted in a multi-crore fodder scam, Lalu Prasad Yadav is undergoing treatment at Ranchi's Rajendra Institute of Medical Sciences for a heart ailment.