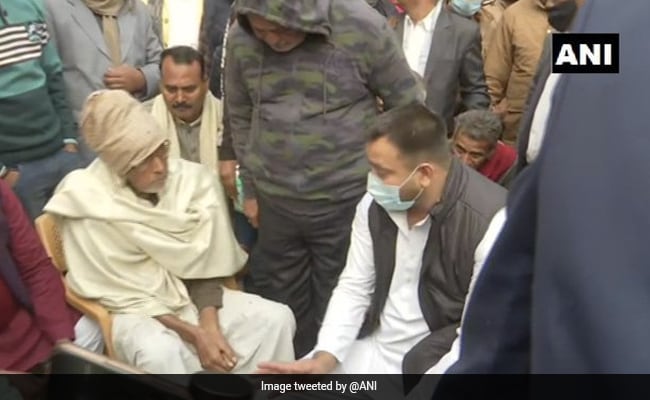 Leader of Opposition in Bihar Assembly and Rashtriya Janata Dal (RJD) leader Tejashwi Yadav reached Chhapra and met the family members of IndiGo airlines manager Rupesh Kumar Singh who was shot dead by unidentified men in the Punaichak area of Patna on January 12.

Rupesh Singh was in his SUV outside the gates of his home on Tuesday, waiting to be let in, when two men riding a bike shot him dead. The killing took place barely 2 km from the Chief Minister's home.

Before leaving for Chhapra today, Mr Yadav said: "Going to meet the family of Rupesh Singh. No arrests made yet. DGP says the crime rate was higher in 2019, has come down now but for 16 years, Nitish Kumar has been chief minister. If the police behave like this, one can understand the ground reality."

"Requesting Nitish Kumar with folded hands... We know that you're a weak chief minister but for the sake of your position, please don't let human lives be sacrificed. It is your responsibility to control crime in the state," he added.

Tejashwi Yadav on Saturday said that Bihar is becoming the crime capital of the country and those sitting in power in the state are protecting the criminals.

Mr Yadav had earlier also said that rumours have been circulating that ministers in the Bihar government might be involved in the murder of the IndiGo airlines manager.