The launch comes three months after Tej Pratap had launched an outfit named after his parents. 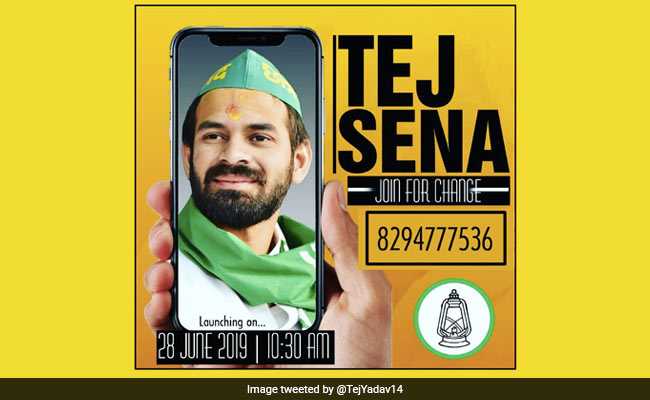 Tej Pratap tweeted about the launch of Tej Sena on Wednesday.

Tej Pratap Yadav, the elder son of jailed RJD chief Lalu Prasad Yadav, is all set to launch a forum for change-makers three months after he launched a political outfit named after his parents.

"Join Tej Sena for change, an online platform for change makers," tweeted the 30-year-old leader on Wednesday, who launched an outfit, "Lalu Rabri Morcha", in March ahead of the national elections; he had claimed that he felt sidelined in the RJD.

Rifts were apparent in the Yadav family after Tej Pratap filed for a divorce last year, barely six months after marrying Aishwarya Rai, and moved out of his home.

After launching his outfit, the mercurial leader campaigned against the RJD and his father-in-law Chandrika Rai in the national elections. He had also threatened to contest against his father-in-law but took a U-turn later.

There were also reports of differences between Tej Pratap and Tejashwi Yadav, Lalu Yadav's younger son who was chosen to oversee the party affairs in his absence after the RJD chief was jailed over corruption charges.

The mercurial leader, however, came out in support of his brother after RJD's dismal performance in the national elections. RJD, which had stitched an alliance with the Congress to fight Lok Sabha elections in Bihar, failed to win even a single seat in the state. It was contesting in 19 of 40 seats under the seat-sharing deal.

Tej Pratap, who had often called himself "Krishna the charioteer" to Tejashwi Yadav's Arjuna in the battle against the BJP-led NDA, said he will "always stand by Tejashwi."

"Be it the mahagathbandhan or the RJD, I will always stand by Tejashwi," he had said.

With Tejashwi Yadav not in Patna since the last month after the election result, Tej Pratap Yadav now sees an opportunity to gain ground, said sources.