Tej Pratap Yadav came out with a video statement, nearly seven minutes long, fulminating against a news portal which had carried a report about his divorce case, apparently presenting him in a poor light. 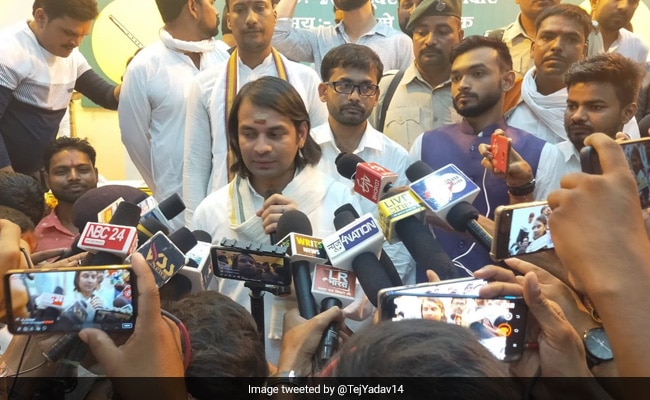 Rashtriya Janata Dal (RJD) president Lalu Yadav's mercurial elder son Tej Pratap Yadav, who is caught in a marital dispute, on Tuesday threatened to release videos of "abuses" that he claimed he and his family suffered after his marriage.

Mr Yadav came out with a video statement, nearly seven minutes long, fulminating against a news portal which had carried a report about his divorce case, apparently presenting him in a poor light.

"I can come out with countless video clips and other evidence to prove the physical and verbal abuse suffered by me, my parents and my siblings," said Mr Yadav who claimed to “maintained silence” ever since he filed a petition seeking divorce four years ago.

Aishwarya stayed on at the house of mother-in-law Rabri Devi, a former CM herself, in an apparent bid to save her marriage before storming out on a rainy winter night, alleging before a posse of journalists that she had been driven out.

Mr Yadav, who remains in news for his mood swings with close party aides and family members at the receiving end, alleged that "the RSS" and "the other side" in his divorce case were hatching a conspiracy to malign him.

"I too have evidence which I have not shared because these involve a young woman (ladki) which makes the matter sentimental (sic)," said Mr Yadav and warned that he might pull no punches if the smear campaign did not end.

He also urged media outlets to abide by a family court order restraining journalists from reporting the divorce case proceedings.

Mr Yadav and Aishwarya were last seen together at the Patna High Court a month ago for counselling, which is mandatory for all couples seeking divorce.