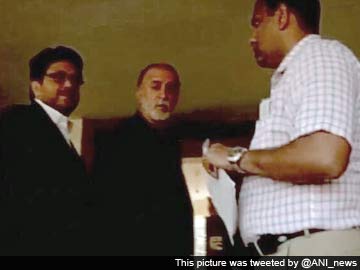 Panaji: A Goa court will give its order shortly on whether Tarun Tejpal, the founder of Tehelka who is accused of raping a younger colleague, will get anticipatory bail or not. Mr Tejpal is likely to be arrested if he does not get bail today.

The public prosecutor argued that prima facie a case is established against Mr Tejpal and the police want his "custodial interrogation." The prosecutor said Mr Tejpal's "immaculate reputation had gone for a toss and being in custody will not dent it any further."

The prosecution also said the CCTV footage from the hotel confirmed sexual assault and that the defence had 'added salt to injury by questioning the integrity of the girl'. They said the woman journalist has been consistent with her version, but Mr Tejpal has been "changing colours like a chameleon."

Mr Tejpal, who is present in court with his family, told the judge through his lawyer that he is ready to surrender his passport to avoid arrest. "Mr Tejpal is ready to stay in Goa till the time it was required by the investigating agency," his lawyer said.

Following the arguments, as Mr Tejpal was leaving the court a man tried to attack him, but was caught by police before he could reach the Tehelka founder.

Earlier in the day, Mr Tejpal visited the Goa Crime Branch before heading to the court. Police sources say Mr Tejpal was not quizzed and stayed there for 10 minutes. "We have joined the investigation started by the Crime Branch yesterday. We will join today also," Mr Tejpal told reporters after coming out of the office.

Yesterday, Mr Tejpal was interrogated at the Goa crime branch office for over an hour.

Promoted
Listen to the latest songs, only on JioSaavn.com
Mr Tejpal is accused of raping the reporter at an annual Tehelka conference in Goa earlier this month. She did not press charges, but detailed her allegations against him to her boss at Tehelka, Shoma Chaudhary, in an email that was leaked. (Tehelka case: What Tejpal did to me is legally rape, she says in statement)

The Goa Police used that email to commence its investigation against Mr Tejpal. Ms Chaudhary resigned as Tehelka's Managing Editor on Thursday.