Tata Steel To Set Up Rs 2,600 Crore Plant In Ludhiana

Welcoming the Tata group to the state, Punjab Chief Minister Bhagwant Mann said that this is a 'Red letter' day in the history of the state as this is the maiden investment by the global company in the state. 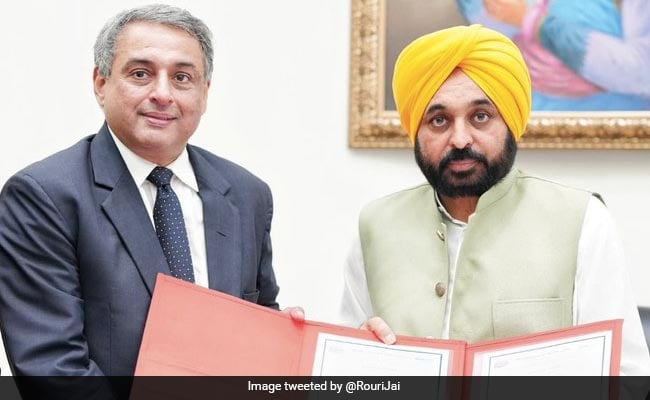 Tata Group will invest around Rs 2,600 crore in the first phase of the project.

Punjab Chief Minister Bhagwant Mann on Friday handed over the land allotment letter to Tata group for setting up its scrap-based steel plant at an investment of Rs 2,600 crore in the first phase at Ludhiana.

"We are committed for making Punjab a front-runner in industrial sector and this maiden investment by Tata group in the state is a step forward in this direction," the Chief Minister said.

Mr Mann said this during a meeting with a delegation led by CEO & Managing Director, Tata Steel, TV Narendran, who called on him at his office on Friday, an official release said.

Welcoming the Tata group to the state, the Chief Minister said that this is a 'Red letter' day in the history of the state as this is the maiden investment by the global company in the state.

He expressed hope that investment by this major industrial group will further put the state on high growth trajectory of industrial development.

Mr Mann said that the Tata Group will invest around Rs 2,600 crore in the first phase of the project which will be located at Ludhiana, adjacent to Hi-Tech Valley Industrial Park of the Punjab Government.

Bhagwant Mann said that the electric arc furnace-based plant will produce 0.75 MTPA (million tonnes per annum) finished steel adding that the raw material for the steel making process is 100 per cent scrap.

Mr Narendran said that Punjab is an ideal location for their electric arc furnace given its proximity to the market and scrap generating auto hub.

Mr Narendran said that steel produced through the recycled route entails lower resource consumption and lower carbon emissions, which reinforces their commitment to reduce the environmental impact of our operations.