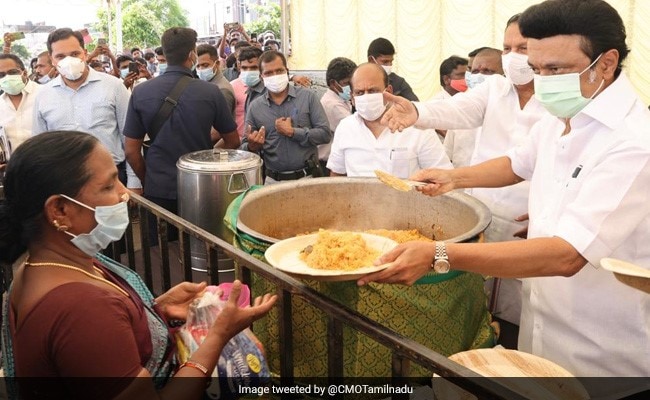 Tamil Nadu Chief Minister M K Stalin who visited the rain-battered districts of Chengalpattu and Kancheepuram on Friday sprang a surprise by briefly stopping to sip tea and interact with the public. Also, he interacted with sanitary workers involved in clearing the silt in the inundated areas.

Like Chennai, both the neighbouring districts were battered by the rains which inundated several areas. The administration launched prompt measures to evacuate the affected people to relief camps and in bailing out water from the marooned areas.

The CM who distributed relief to the rain displaced families, had launched a special medical camp  today for treating the people during the Northeast Monsoon.

While in Chengalpattu district, the Chief Minister stopped at a tea shop in Keezhakottaiyur and interacted with the public. As he was sipping tea, few youngsters including those working at the tea shop, approached him for a selfie which he obliged with a smile on his visage.

At Mambakkam in the district, Mr Stalin gave away relief to the people and housing pattas to Irula families. Later, the Chief Minister interacted with the sanitary workers in Tambaram.

The Chief Minister has been inspecting several areas affected by heavy rains since the last few days.

Apart from inspecting the flood mitigation work at Mudichur, Mr Stalin reviewed the dredging work at Narayanapuram lake and the zero point and regulator of the Adyar River.