A Raja had on Saturday made reference to Edappadi Palaniswami's mother, calling his birth "premature". 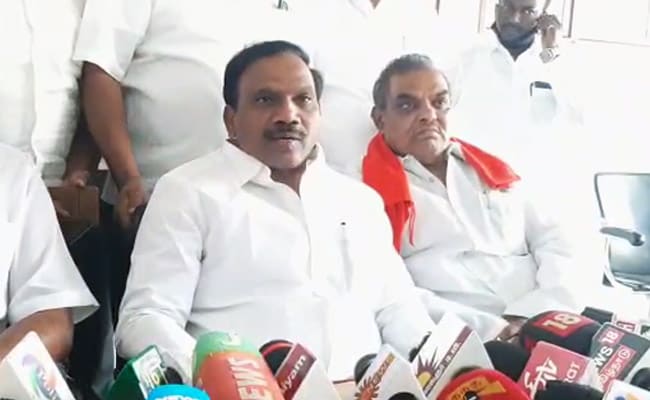 A Raja said he had been misunderstood just like in the 2G case in which he was acquitted.

DMK leader Andimuthu Raja today responded to an Election Commission notice saying he had not made any speech that would demean women or motherhood as alleged by the AIADMK. The former Union Minister said he had used a simile while responding to Tamil Nadu Chief Minister Edappadi Palaniswami's comment against his leader MK Stalin. Accusing him of using vulgar and derogatory language, the ruling party wanted the Nilgiris MP barred from campaigning.

The DMK Deputy General Secretary has now sought a copy of the complaint against him and the text of his alleged abusive speech.

"In Tamil oratory, simile is a well-accepted norm. In my speech, evolution of the political heights and their means of MK Stalin and Edappadi Palanisami were compared by me through a simile as newborn babies for the easy understanding of the common mass," Mr Raja told the poll panel, according to ANI.

"This was in response to the repeated allegations of the Chief Minister that MK Stalin had never worked hard to become the leader. Hence, if the full text is considered by the committee, I am hopeful it will wipe out the insult and consequent injury inflicted on me," he said.

Mr Raja had on Saturday made reference to Mr Palaniswami's mother, calling his birth "premature". Earlier, he had called the Chief Minister "worth one rupee less than Stalin's slipper".

The next day, Mr Palaniswami made an emotional appeal to voters to punish those who had allegedly insulted his mother and, by extension, all mothers and women.

Mr Raja was then forced to apologise, though he insisted he was misunderstood. The 57-year-old former telecom minister, referring to the 2G case in which he was acquitted, said: "Justice Saini's four-point summary in 2G verdict will apply here too: Misreading, selective reading, out of context reading and non-reading."

Based on a complaint from the AIADMK, the poll panel, however, issued a notice to him yesterday, asking him to explain his remarks.

Tamil Nadu votes in a single phase on April 6; results will be out on May 2.