Tamil Nadu Congress Committee chief said both sides exchanged their views and it was decided that they meet again after holding separate talks within the respective parties. 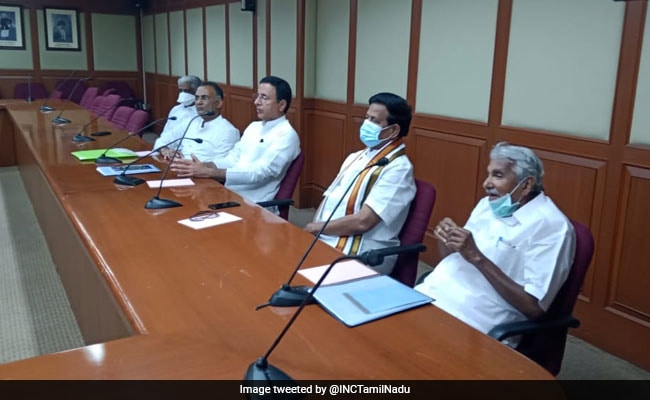 Tamil Nadu Assembly Polls: A Congress delegation arrived in Chennai to hold talks with the DMK.

The opposition Dravida Munnetra Kazhagam (DMK) in Tamil Nadu today held talks with its ally the Congress on sharing of seats in the Assembly elections for which the schedule is yet to be announced.

Veteran Congress leader and former chief minister of Kerala Oommen Chandy, party spokesperson Randeep Surjewala and AICC Tamil Nadu in-charge Dinesh Gundu Rao were part of the delegation which arrived in Chennai to negotiate the seat-sharing with the DMK.

The DMK was represented by its leaders who included general secretary Duraimurugan,Thoothukudi MP Kanimozhi and TR Baalu.

"The discussion was good. Both sides exchanged their views and it was decided that we meet again after holding separate talks within the respective parties," Tamil Nadu Congress Committee president KS Alagiri said.

"We haven't discussed the numbers (of assembly constituencies to be contested). We conveyed our views and they too expressed their views," he added.

Following the death of R Doraikannu, who held the agriculture portfolio, on October 31,2020, the ruling AIADMKs strength was reduced to 124, including the Speaker, from 125 in the 234-member House.

The DMK's number too dropped to 97 from 100 owing to the deaths of KPP Samy, S Kathavarayan and J Anbazhagan last year.

The Congress accounts for 7 legislators in the House which also has an independent and a lone IUML member.