When MK Stalin Became Rajinikanth: Image Of The Day

The superstar of Tamil Nadu's Political League today, MK Stalin -- popular as Thalapathy - morphed into a Rajinikanth avatar in the iconic Mani Ratnam film by the name Thalapathy. 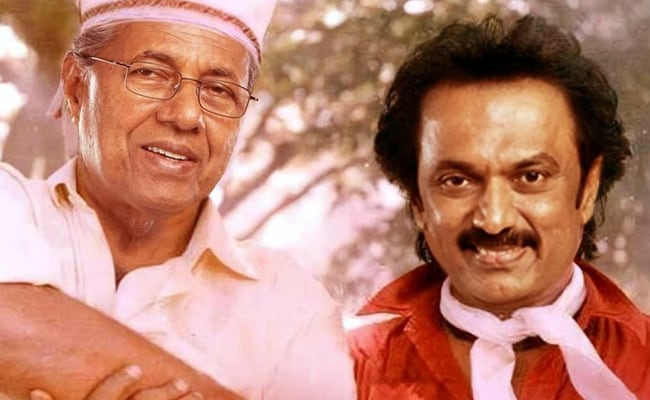 Rajinikanth, the superstar of Tamil cinema, opted out of politics months before assembly elections in Tamil Nadu, but his larger-than-life shadow continues to loom over the state's politics.

The superstar of Tamil Nadu's Political League today, MK Stalin -- popular as Thalapathy - morphed into a Rajinikanth avatar in the iconic Mani Ratnam film by the name Thalapathy.

MK Stalin is set to be Chief Minister of Tamil Nadu after a long wait for years. His party DMK returns to power after 10 years. When it was last in power, Mr Stalin's father and DMK patriarch M Karunanidhi was Chief Minister.

The meme makers also added Mr Stalin's Kerala counterpart Pinarayi Vijayan, projecting him as Mammooty in the role of Rajinikanth's friend in the 1991 film.

Original superstar opted out of #TamilNaduPoliticalLeague but meme-makers decided to give a #Rajini touch to today's political superstar @mkstalin, popular as #Thalapathy; #Comrade@vijayanpinarayi became #Mammooty from #ManiRatnam's 1991 iconic film #Thalapathi@ndtv@ndtvindiapic.twitter.com/JoPqopbRGz

Keralites &Tamilians voted for 2 publicly declared atheists. #PinarayiVijayan#Stalin
Sign that south is going in line with 21st century and people here don't vote on the basis of religion

Kerala is the only state in India that has 0 seats for BJP #TamilNaduElection2021#Keralapic.twitter.com/JrWayQLjgL

The DMK has won a comfortable victory in Tamil Nadu over its rival AIADMK. Both parties contested their first state election after the death of their iconic leaders - Karunanidhi and AIADMK's J Jayalalithaa.