Punjab Police claimed that the Delhi Police lodged a false and fabricated FIR against them. 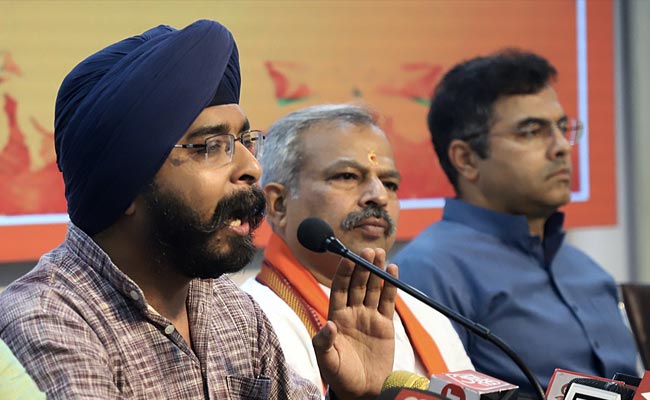 Justice Anu Malhotra said the respondents shall file their replies within four weeks and listed the matter for further hearing on July 26.

The court, however, did not issue a notice at this stage on another petition filed by the Punjab government seeking the quashing of two orders passed by a Delhi district court - for search and production of Mr Bagga and his subsequent release from the custody of Punjab Police without giving it a hearing.

The high court, which listed the petition on May 26, said it would go through the entire record of the case before coming to any conclusion on whether to issue notice on the petition.

On May 6, the Punjab Police had arrested Mr Bagga from his Janakpuri residence here but the Delhi Police had brought him back from Haryana, alleging that its Punjab counterpart had not informed it about the arrest.

Following his arrest by the Punjab Police in a case relating to allegedly making provocative statements, promoting enmity, and making criminal intimidation, the Delhi Police registered an FIR of abduction against Punjab Police personnel on May 6 late at night.

Punjab Police, in its plea, claimed that when they reached Janakpuri Police Station on May 6 to inform it about Mr Bagga's arrest, the Delhi Police refused to cooperate with it and illegally detained them.

It further said the Delhi Police lodged a false and fabricated FIR against Punjab Police under sections 452 (house-trespass after preparation for hurt, assault, or wrongful restraint), 392 (robbery), 342 (wrongful confinement), 365 (kidnapping), 295A (deliberate and malicious acts, intended to outrage religious feelings of any class by insulting its religion or religious beliefs) and 34 (common intention) of the Indian Penal Code (IPC) and obtained search warrant by concealing the relevant and material facts of the lawful arrest of Mr Bagga, after which Punjab Police officials were detained by Haryana Police and deprived of the lawful custody of the accused.

"Therefore, the illegal means and procedure used by the Delhi Police officials along with Haryana Police officials by using false and concocted FIR which was used to obstruct the Punjab police officials from duly discharging their duty and rather in connivance assisted the accused in releasing him from the lawful custody of Punjab state police officials under the garb of the fabricated story of accused being kidnapped by unknown persons," the petition said.

It alleged that the Delhi Police's conduct is totally dubious, illegal, unwarranted, malafide, and unauthorised, who not only misled the court by assisting the accused but also concealed the fact that the person whom they are presenting as a victim in the FIR is the accused and has been arrested by the Punjab Police in another case.

Senior advocate Abhishek Manu Singhvi, representing the Punjab government, said he was only seeking issuance of notice on the petition at this stage and contended that the magistrate had passed the order for the release of Mr Bagga without hearing Punjab Police despite the officials standing outside his residence, and natural justice was disregarded.

Additional Solicitor General (ASG) Sanjay Jain, appearing for Delhi Police, contended that the Punjab Police's petition was not maintainable as the Commissioner of Police was not made a party to the petition even when serious allegations have been made against the force.

"What is the locus of Punjab Police to file this petition? It was not made an accused in the FIR (for abduction)..." he argued.

Senior advocate Kirti Uppal, appearing for Mr Bagga, contended that the Punjab Police came here to arrest the BJP leader as if he was some terrorist who was going to run away.

"The entire allegations against me do not incarcerate me for more than three years. Am I a terrorist? You are coming here as if some terrorist is going to run away. This is an effort by a particular political party to show its strength," he argued.

The court, after hearing the parties, said the Commissioner of Delhi Police be impleaded as a separate party in the petition.

While rebutting the arguments of the other side, Mr Singhvi said, "here the ruling party's spokesperson is involved and the Delhi Police is standing here opposing the issuance of notice on the petition. The entire machinery is standing here." The Punjab Police, in its petition, said the FIR and the order of search warrants and order of release of the said accused, dated May 6, 2022, passed by the link duty MM, Dwarka, Delhi are liable to be set aside under section 482 of CrPC under the jurisdiction of this court along with all judicial/executive proceedings emanating from the FIR which are an abuse of process of law and non-est in the eyes of law.

On April 1, the Punjab Police booked Mr Bagga for alleged offences of making provocative statements, promoting enmity, and criminal intimidation. The case was registered on a complaint of AAP leader Sunny Ahluwalia, a resident of Mohali.

The FIR referred to Mr Bagga's remarks on March 30, when he was part of a BJP youth wing protest outside the residence of Delhi Chief Minister Arvind Kejriwal.