Similar notices have also been issued for Grande Maison Ltd and Hollyport Ltd - two British Virgin Islands-based companies suspected to have links with the Bishnoi family. Both the companies were incorporated on the same day on July 19, 1996 and also figured in 'Panama Papers'. 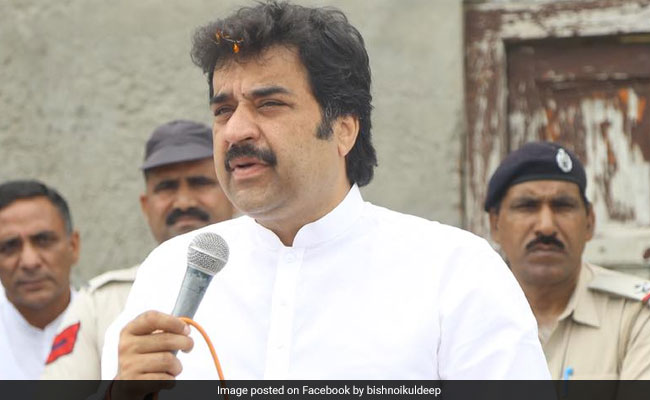 The Government of Switzerland has issued public notices for sharing of details with India about Swiss bank accounts and other financial assets of Congress leader Kuldeep Bishnoi and his wife Renuka following receipt of an ''administrative assistance'' request from the Indian authorities.

The Bishnois have been asked to reply within ten days to exercise their right to appeal against sharing of information as per the Swiss laws, according to two separate notices published in Switzerland's latest federal gazette, dated July 7, in Bern.

Similar notices have also been issued for Grande Maison Ltd and Hollyport Ltd - two British Virgin Islands-based companies suspected to have links with the Bishnoi family.

Both the companies were incorporated on the same day on July 19, 1996 and also figured in 'Panama Papers', a leaked list of entities based in various tax havens. As per official records, both the companies were struck off from the registry of companies in April 2016 after remaining inactive since August 2014.

Repeated queries sent by news agency Press Trust of Inida to Kuldeep Bishnoi, a sitting Congress MLA in the Haryana assembly, and his office remained unanswered.

In the notices, Kuldeep Bishnoi, his wife and the two firms were asked to appoint a representative within 10 days to assert their right to be heard against the 'administrative assistance' proposed by Switzerland''s Federal Tax Administration.

Such assistance includes sharing of banking and other details of the individual or the company having accounts with banks or other financial institutions in Switzerland.

While the notices did not disclose any specific details about the probe, such notices are typically issued by the Swiss Federal Tax Administration after receipt of a request by a foreign jurisdiction along with prima facie evidence of suspected tax evasion or other financial wrongdoings.

If the concerned person or company fails to provide a valid reason against the administrative assistance, the details are subsequently shared by the tax department with the requesting authority.

While an automatic exchange of information framework is in place between India and Switzerland since last year, sharing of details for older cases also takes place under the mutual ''administrative assistance'' pact between the two countries on submission of a request along with satisfactory prima facie evidence of financial wrongdoings.

Kuldeep Bishnoi has been facing probe by multiple agencies including the Income Tax Department, which had conducted raids at various places linked to him in July last year.

The tax department had also attached a five-star hotel in a prime business area of Gurugram, while designating that as a 'benami' or unaccounted property of the Bishnoi family. It was alleged at that time that the shareholding in the hotel was routed through a front entity registered in British Virgin Islands.

The tax department had also said in August 2019 that foreign assets worth over Rs 200 crore allegedly linked to Kuldeep Bishnoi and his family were detected and were being probed.

At that time, the Congress party had alleged that the tax department's move was politically motivated ahead of assembly elections in the state.

The tax department had also said that foreign holdings of Kuldeep Bishnoi and his family had "remained hidden for decades" under complex multi-layered structures through companies located in countries like the British Virgin Islands, Panama, UK, UAE and Jersey.

"These structures have involved various front men and corporations across continents," it had said, while alleging that the black money generated in India was stashed abroad in the form of lavish properties in the names of foreign trusts and companies located in tax havens.