Read inOther Languages
This Article is From Aug 22, 2020

Abu Yusuf, the accused, was arrested at around 11.30 PM in the national capital's Dhaula Kuan area, and two IEDs and a pistol were recovered from his possession, the police said

Delhi Police have said they are questioning the suspect, Abu Yusuf, after the arrest

A suspected ISIS terrorist, armed with explosives and a weapon, was arrested in Delhi last night after a brief shootout, the police said, adding that he had been plotting a "lone wolf attack".

A high alert has been declared in the national capital and neighbouring Uttar Pradesh, with vehicles crossing the border between Delhi and Noida, in UP, being checked by security officials.

"One ISIS operative was arrested with Improvised Explosive Devices (IEDs) by our Special Cell after an exchange of fire at Dhaula Kuan," Pramod Singh Kushwaha, Delhi DCP (Deputy Commissioner of Police) Delhi Police Special Cell, was quoted as saying by news agency ANI.

The senior cop was also quoted by news agency PTI as saying the suspect had planned to conduct a terror strike in the city on Independence Day, but had been foiled by heavy security.

"Mustakeem Khan (alias Abu Yusuf) was to come to Delhi around August 15 to carry out terror strikes... Now, he felt the security could be lax so he could come here. But he was nabbed," he told reporters, adding, "We had been conducting surveillance on him through sources. We also found he was in touch with ISIS and directly in touch with its commanders".

The accused was arrested at around 11.30 PM on Friday in Delhi's Dhaula Kuan area. Two pressure cookers, turned into IEDs (improved explosive devices) with about 15 kg of explosives in them, a pistol with four cartridges and a motorcycle were recovered from his possession, the police said. The two IEDs have been defused - police said they were "fully ready" and only needed a timer to be activated - and the accused has been remanded to the custody of the Special Cell for eight days.

The cops also believe the suspect visited several places in Delhi and was plotting a lone wolf attack. The matter is being investigated further to determine if he had accomplices in other parts of the city or country.

Sources said Abu Yusuf told police he was a resident of Uttar Pradesh's Balrampur. He was riding a motorcycle with UP number plates when he was intercepted and arrested, sources added. Following his arrest, officials have conducted raids at six places across Delhi, Ghaziabad in UP and Uttarakhand.

A team from Delhi Police has reached Balrampur, where people have been stopped from entering the village and others are being questioned. There is heavy police presence in the area. According to DCP Kushwaha the suspect had tested smaller explosive devices near the burial ground in the village. 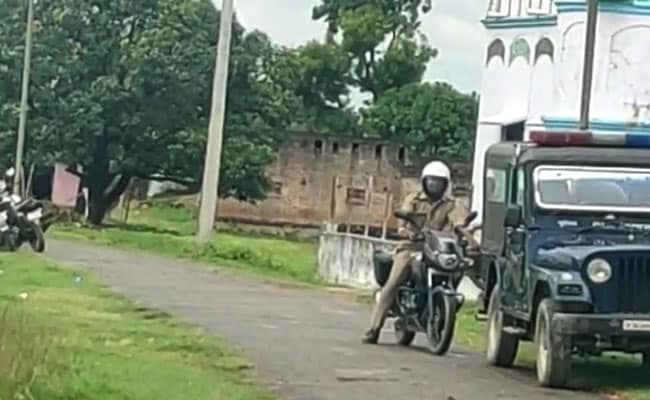 A Delhi Police team has reached Balrampur in UP

Meanwhile, NSG commandos and members of the Bomb Disposal Squad (BDS) were seen carrying out search operations near the Buddha Jayanti Park in the national capital's Ridge Road area.

In visuals from ANI, NSG (National Security Guard) commandos, dressed in black and equipped with bulletproof jackets, are seen around a table on which what seems to be electronic equipment is set up. 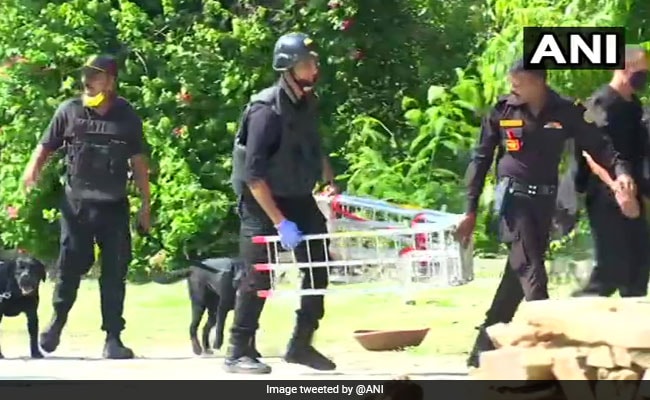 As the visuals play out a six-wheeled black robotic device, likely a bomb defusing or disposal device, trundles down the path and towards a parked truck, at which point it stops and turns to the camera.

In earlier visuals shared by ANI a larger group of people, some of whom are in civilian clothes, can be seen inside the park. The visuals also show NSG commandos with sniffer dogs patrolling the area.

The arrest in Delhi comes days after a doctor was arrested in Bengaluru for alleged links to ISIS.

Abdur Rahman, 28, who worked as an ophthalmologist at a medical college in the city, was arrested by the NIA (National Investigation Agency) based on intelligence from a couple arrested in Delhi in March.

After the arrest the NIA carried out searches at three of premises belonging to Abdur Rehman and seized digital devices, a mobile phone and laptop containing incriminating material.

The couple that provided the intel leading to Rehman's arrest also allegedly had links with ISIS and other terrorists, including a man in Delhi's Tihar jail.

Green Panel's Directions To Pollution Board On Water Wastage By Purifiers