The Indian community in Kuwait is apprehensive of the changes in Kuwaiti government's new labour policies. 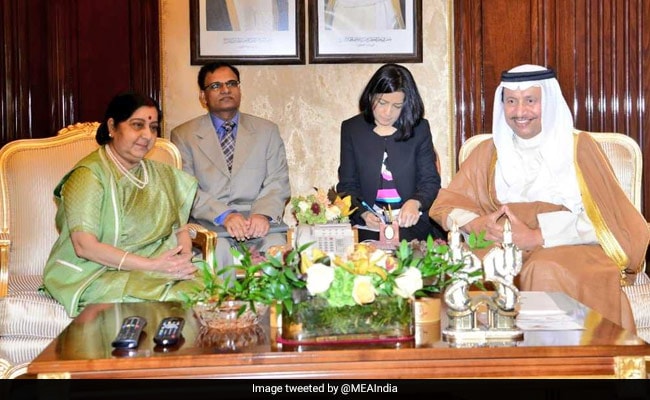 The meetings with the Amir and PM of Kuwait followed MsSwaraj's interaction with the Indian community.

Ms Swaraj arrived on Tuesday in Kuwait from Doha where she met Emir of Qatar Sheikh Tamim Bin Hamad Al-Thani on Monday and discussed ways to move forward on the roadmap set by the top leaders of the two countries.

The meetings with the Amir of Kuwait and the Prime Minister followed Ms Swaraj's interaction with the Indian community in Kuwait.

The Indian community in Kuwait is apprehensive of the changes in Kuwaiti government's new labour policies.

The Indian embassy announced today that it will organise a meeting on November 2 for all Indian engineers who have been affected by the changes in Kuwait Government's policies, amid reports that thousands of Indian engineers may face deportation due to the new labour policies.

The Indian community contributes significantly to the economic and scientific development of Kuwait.

Earlier, Ms Swaraj offered a floral tribute at the statue of Mahatma Gandhi in Kuwait.

"Kuwait joins the world in celebrating Bapu at 150 this year," External Affairs Ministry Spokesperson Raveesh Kumar wrote in a tweet along with a picture of the statue.

As per the latest statistics, over 8 lakh Indian nationals legally reside in Kuwait.

Kuwait has been a reliable supplier of crude oil to India. During 2017-18, Kuwait was the ninth largest oil supplier to India and it meets about 4.6 per cent of India's energy needs.