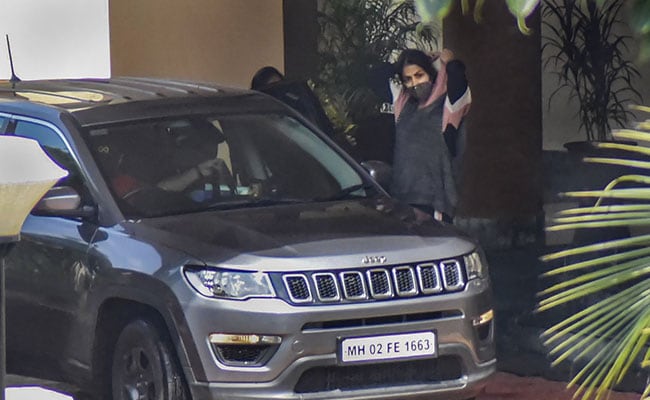 Sushant Rajput case: Rhea Chakraborty is being questioned by three agencies - the CBI, the ED and the NCB

Actor Rhea Chakraborty, who has been questioned by the Central Bureau of Investigation (CBI) for an average of eight hours daily over the last three days about the death of her boyfriend and actor Sushant Singh Rajput, was seen arriving at the DRDO guest house for the fourth consecutive day today.

Besides the 28-year-old actor, the central investigation agency is also questioning a number of people about the circumstances leading to Sushant Singh Rajput's death on June 14.

Ms Chakaraborty's brother Showik, Mr Rajput's former manager Shruti Modi, his assistant Neeraj Singh, flatmate Siddharth Pithani, cook Keshav, housekeeper Dipesh Sawant and former housekeeper Samuel Miranda - all of whom are a part of the investigation - were also seen arriving at the DRDO and Air Force guest houses, where a CBI team has set up base in Mumbai after it took over the case on direction from the Supreme Court.

A CBI team was also seen at Mr Rajput's residence in Mumbai today.

Mr Jani and Mr Arya have been summoned in connection with chats recovered by the ED from Ms Chakraborty's cellphone.

According to the ED, her conversations with Mr Arya were about banned narcotic substances, including cannabis, after which the Narcotics Control Bureau (NCB) joined the probe.

Ms Chakraborty's lawyer has denied all charges saying the actor has never had drugs in her life and claimed she tried to stop Mr Rajput from consuming marijuana.

"Sushant used to smoke marijuana. I tried to control him to stop... I have never spoken to a (drug) dealer or taken drugs in my life. I am open to a blood test," Ms Chakraborty had told NDTV in an interview.

Ms Chakraborty who dated Mr Rajput for a year and left his home on June 8, six days before he was found dead, has been asked a series of questions including details of her relationships with the 34-year-old and his family, why she left his house and if she had any contact with him after she left.

Mr Rajput's family has said Ms Chakraborty and her family mentally harassed the actor, took money from him and had a possible role in his death.

Ms Chakraborty has denied all charges. She has also tried to turn the tables on Mr Rajput's family, pointing out that it was his sister and not she who was with the actor the week he died.

The CBI has not summoned Sushant's sister Meetu Singh for questioning yet, but she is important to the case as she was living with him between June 8 and June 12, till two days before his death.

After Ms Chakraborty left on June 8, it was Ms Singh who was looking after her brother. According to statements of those present in the house on June 14, Mr Rajput's body was brought down on his sister's instructions.

It is also clear from the WhatsApp chats between Ms Singh and her brother's former manager Ms Modi, that the actor's family knew of his medical condition.