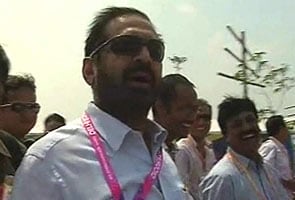 New Delhi: Congress on Tuesday axed Suresh Kalmadi as secretary of its Parliamentary Party, seeking to distance itself from the Organising Committee Chairman of the Commonwealth Games in the wake of allegations of corruption.

Party sources said Kalmadi had been asked to put in his papers as CPP Secretary earlier. Congress chief Sonia Gandhi is the Chairperson of the CPP.

The decision by Gandhi came on the opening day of the Winter Session of Parliament in which opposition had threatened to raise the issue of alleged corruption in the Games-related projects.

Kalmadi, a Congress member of Lok Sabha from Pune, was the Chairman of Organising Committee of the sporting event which concluded last month.

Promoted
Listen to the latest songs, only on JioSaavn.com
Soon after the completion of the Games, Congress had left Kalmadi to fend for himself declining to give a clean chit to him or others associated with organisation of the Games.

Sports Minister MS Gill, Urban Development Minister S Jaipal Reddy and Delhi Chief Minister Sheila Dikshit were among others involved in the preparations for the Games.