Surat Centre Where Fire Killed 19 Was An Illegal Construction: Lawmaker

Surat Fire: Navsari lawmaker CR Patil told NDTV that around 120 students were registered at the coaching centre that had no fire escape or proper safety equipment. 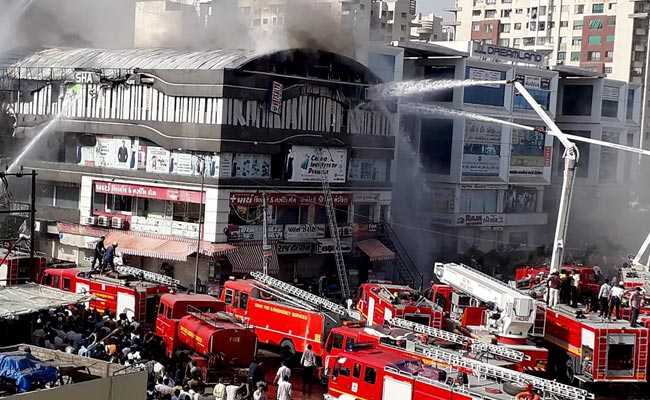 Surat Fire: Students aged between 14 and 17 are among the victims.

A deadly fire in a coaching centre in Gujarat's Surat that killed 19 students was an illegal construction on the top floor of a multi-storey building, a Gujarat lawmaker told NDTV. A massive fire erupted at the Takshashila Arcade in the Sarthana area of the city at around 3.30 pm today.

Navsari lawmaker CR Patil told NDTV that around 120 students were registered at the coaching centre that had no fire escape or proper safety equipment.

Students aged between 14 and 17 are among the victims. Two more are critically injured.

The commercial building has four storeys and the fire engulfed the third and fourth floors of the structure forcing many students to jump off the building to escape flames and smoke.

Mr Patil also praised the efforts of people who helped to catch the students jumping off.

Another parliamentarian from Surat, Darshana Jardosh also praised the crowd.

"Some of these students are critical but the crowd managed to save their lives," Ms Jardosh told NDTV.

It was not immediately clear what caused the fire. The owners of the building are on the run, police officials said.

A fire official said 19 fire engines were sent in to control the fire. The fire has been doused now.

An investigation has been ordered into the incident and the state government has promised to give Rs. 4 lakh to each of the families of those killed.