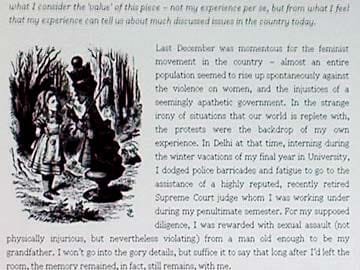 A snapshot of the blog posted by Stella James last week

New Delhi: Three Supreme Court judges will investigate the allegations that a young lawyer was sexually harassed during her internship by a judge of the top court.

In a blog posted last week, Stella James says she was harassed by the judge in a hotel room in Delhi on Christmas Eve. She says he has since retired.

"For my supposed diligence, I was rewarded with sexual assault (not physically injurious, but nevertheless violating) from a man old enough to be my grandfather," she writes. (Read entire blog on Indian Journal of Law and Society here)

Announcing the inquiry today, the Chief Justice of India P Sathasivam  said, "We cannot take it lightly. As the head of the institution, I am also concerned about the allegation and anxious whether the statement is true or not."

Ms James today released a statement saying she will testify for the three judges. "Since the committee has now been constituted, I will depose before the honorable judges," she said.

Now a lawyer with an NGO, Ms James says in her blog she decided not to take action because she had "no real ill-will towards the man, and had no desire to put his life's work and reputation in question."

She places her reaction and distress in the context of the massive street protests that were being held at the time to express the nation's outrage over the fatal gang-rape of a young student on a Delhi bus.

Promoted
Listen to the latest songs, only on JioSaavn.com
Sharing the conflict she felt over not pursuing a complaint, she writes, "I bore, and still bear, no real ill-will towards the man, and had no desire to put his life's work and reputation in question. On the other hand, I felt I had a responsibility to ensure that other young girls were not put in a similar situation."

Ms James also disclosed in an interview this month Legally India, a website that covers legal news, that she knows of "at least four other girls who've faced harassment from other judges - not perhaps as [bad as mine]: most of them were in the chambers of the judge and other people around, so it never gets too bad." (Read entire interview with Legally India here)