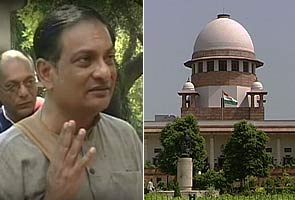 New Delhi: The Supreme Court will hear the bail plea for Civil rights activist Dr Binayak Sen. He was sentenced to life imprisonment by the trial court on charges of sedition and links with Naxalites.

A professional doctor and pass out of the prestigious Christian Medical College (CMC), Vellore, Sen has sought bail contending that the trial court has erred in convicting him when there was no substantial evidence. He has challenged the order of the Chhattisgarh High Court which had rejected his bail plea early this February.

In the petition prepared by senior advocate Ram Jethmalani it has been submitted that Sen has already spent two years in jail after his arrest and he should be allowed to come out on bail during the pendency of appeal in the High Court.

Sen, Vice President of People's Union of Civil Liberties, was convicted for sedition and sentenced to life imprisonment along with Naxal ideologue Narayan Sanyal and Kolkata businessman Piyush Guha for colluding with Naxals to establish a network to fight the state.

Jethmalani, who had argued the bail plea in the High Court, had dubbed the charges against Sen as politically motivated and had said, "The whole case is nothing but political persecution."

Sen's conviction and sentence had led to outrage in many quarters, including international bodies of Human Rights.

Forty Nobel laureates have also been trying their lot to get him out of the prison. They sent a letter to the Indian government urging it to ensure that Dr Sen is given a fair trial, and asking for him to be released on bail.

"Dr Sen is an exceptional, courageous, and selfless colleague, dedicated to helping those in India who are least able to help themselves," the laureates said in the statement, posted on a website campaigning for Sen's release.
Comments
Binayak SenSupreme CourtRam JethmalaniPeople's Union of Civil LibertiesSeditionNaxalite