On December 6, in a stunning twist to a crime that horrified the nation, the four accused of the young Telangana woman veterinarian's gang-rape and murder were shot dead by cops after they allegedly attempted to escape

The Supreme Court has ordered an independent inquiry into the killing of the four men accused of the rape and murder of a 26-year-old woman in Telangana last week. The probe panel will be headed by retired top court judge VS Sirpurkar and includes Justice Rekha Prakash Sondur Baldota, a former Bombay High Court judge and former CBI director DR Karthikeyan. The panel, which will be based out of Hyderabad, will submit a report to the Supreme Court in 6 months.

The top court also said no other court or authority will probe the matter until further orders, meaning the eight-member SIT set up by the Telangana government will stand down, as will the inquiry instituted by the National Human Rights Commission (NHRC).

"We are of the considered view that there should be impartial inquiry into the encounter deaths of the four people accused in the gang-rape and murder of a veterinarian in Telangana," the bench, also comprising Justices SA Nazeer and Sanjiv Khanna, said.

"We are not saying police is guilty. We don't know. We will order a probe and you will cooperate," the court said, adding, "There are aspects of your (Telangana) version which needed an inquiry".

The top court also dismissed the Telangana government's contention that it had set up a SIT to probe the matter, pointing out it had been constituted "to probe the cause of death (of the rape accused) and not prosecute the guilty".

In the hearing the Supreme Court grilled the Telangana government which, represented by senior advocate Mukul Rohatgi, appeared reluctant to cede ground on many aspects of the incident.

"Why were the police officials, accompanying the accused to the crime scene, carrying loaded guns... why did the accused attack the policemen with stones when they had snatched arms... were they history sheeters?" the Chief Justice of India demanded to know.

At one point the Telangana government also indicated it would not seek to prosecute the police personnel involved, leading the court to ask if it presumed the cops were innocent and cautioned the state against resisting an inquiry.

The court also issued a notice to electronic and print media, on a plea by petitioner ML Sharma, to refrain from reporting on panel hearings. 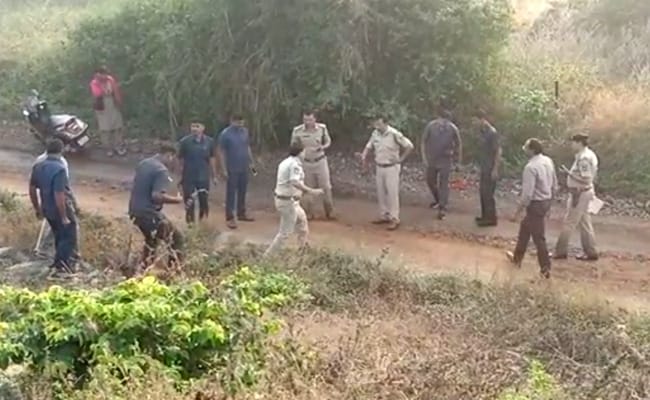 On December 6, in a stunning twist to a crime that horrified the nation, the four accused of the young woman's gang-rape and murder were killed by cops who claimed the men snatched their weapons and opened fire during investigations where her body was found.

The men - Mohammed Arif (26), Jollu Shiva (20), Jollu Naveen (20) and Chintakunta Chennakeshavulu (20) - had been taken for a reconstruction of events at the crime scene, which is around 50 kilometres from Hyderabad. They were not handcuffed, cops said.

The police also claimed the accused started attacking them with sticks, stones and sharp objects and snatched their weapons, which were already unlocked.

Two petitions had been filed in the Supreme Court, one by lawyers GS Mani and Pradeep Kumar Yadav, and the other by advocate ML Sharma, seeking an independent investigation against the police officials concerned.

The controversial shooting divided opinion on an incident has been passionately debated for days and drew people out to the streets in anger. Several celebrities and even politicians praised the police though there were many voices of caution.

Shortly before the killing of the accused, furious protests broke out in parliament, with Samajwadi Party MP Jaya Bachchan leading a chorus of angry voices. "These types of people (the rape accused in the Telangana case) need to be brought out in public and lynched," she declared.