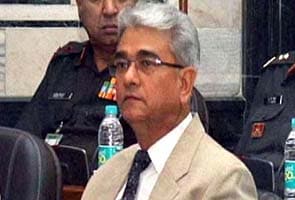 New Delhi: The Supreme Court today refused to hear a petition challenging the appointment of Shashi Kant Sharma as the Comptroller and Auditor General of India (CAG).

A bench headed by Chief Justice Altamas Kabir asked the petitioners, including former Chief Election Commissioner N Gopalaswami and former Chief of Naval Staff Admiral (retd) RH Tahiliani, to approach the high court which is "equally equipped to deal with the matter".

The petition sought setting aside of Mr Sharma's appointment contending that it was made arbitrarily and "without any system for selection, without any selection committee, any criteria, any evaluation and without any transparency".

The nine petitioners also sought a direction to the Centre to "frame a transparent selection procedure based on definite criteria and constitute a broad-based non-partisan selection committee, which after calling for applications and nominations would recommend the most suitable person for appointment as CAG".

Senior advocate Fali S Nariman, appearing for the petitioners, submitted that the court should intervene, saying it is an important matter.

One of the grounds raised in the PIL was that during his tenure as the DG (Acquisitions) or as the Defence Secretary, Sharma cleared several major defence purchases some of which have turned out to be a source of embarrassment to the Centre.