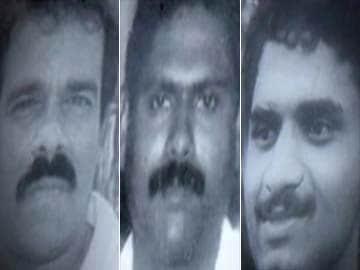 New Delhi: The Supreme Court today commuted the death sentence of three men convicted of killing former prime minister Rajiv Gandhi to life in prison, rejecting the government's view that an 11-year delay in deciding their mercy petition was not agony for them.

The convicts, Santhan, Murugan and Perarivalan, can also walk out of jail if the Tamil Nadu government grants them remission, the court ruled. The decision will be a politically loaded one ahead of the national election, due by May.

While sparing the three men from the gallows, a bench headed by the Chief Justice of India, P Sathasivam, said, "It is definitely not a pleasure for this court to interfere with the powers of the President. We implore upon the government to advise the President so that mercy petitions can be disposed of at the earliest."

The court did not accept the government's view that the convicts did not deserve mercy. The Centre's lawyer, Attorney General Goolam Vahanvati, had said there was "not a word of remorse" in their mercy plea and there was "no agony, torture or dehumanizing effect due to delay."

Today's verdict follows the Supreme Court's January 21 order commuting the death sentences of 15 convicts, announcing that "inordinate and inexplicable" delays in carrying out executions were grounds for reducing their original punishment.

Santhan, Murugan and Perarivalan were convicted in 1998 for Mr Gandhi's assassination by a woman who greeted him with a garland and a bomb strapped to her chest during a rally in 1991. Their mercy petition was sent to the President, the last stage in the process of appeals, in 2000 and was rejected 11 years later. Their hanging was stayed in 2011 on the orders of the Madras High Court.

That year, the Tamil Nadu assembly had passed a resolution urging the President to grant mercy to the convicts and consider "Tamil sentiment." Today's ruling that the state government will decide whether to free them has inevitably taken a political turn.

Promoted
Listen to the latest songs, only on JioSaavn.com
"My greetings to Santhan, Murugan and Perarivalan," DMK leader M Karunanidhi said. "I would be doubly happy if the Centre and state released them.

MDMK's Vaiko pressed the Jayalalithaa government to decide quickly on releasing the men.