The petitioners had challenged the constitutional validity of a legal provision dealing with criminal contempt for "scandalizing the court", saying it was violative of freedom of speech and right to equality. 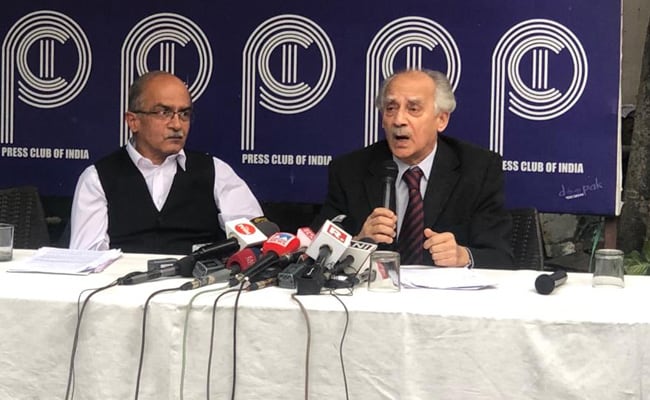 A bench headed by Justice Arun Mishra was informed by senior advocate Rajeev Dhavan, who was representing the petitioners, that they want to withdraw the plea as several petitions on the same issue are pending before the Supreme Court and they don't want "this to be entangled" with them.

The bench, also comprising Justices BR Gavai and Krishna Murari, allowed the petition to be withdrawn with liberty to the petitioners to approach the appropriate judicial forum, except the top court.

During the brief hearing conducted through video-conferencing, senior advocate Rajeev Dhavan said that at this stage the petitioners want to withdraw the plea with liberty to approach the top court again, maybe after two months.

The petitioners had challenged the constitutional validity of a legal provision dealing with criminal contempt for "scandalizing the court", saying it was violative of freedom of speech and right to equality.

Earlier, on August 8, a reliable official source had said that the Supreme Court administration had called for an explanation from officials concerned over the listing of the plea for hearing on August 10 before another bench of the top court comprising Justices DY Chandrachud and KM Joseph.

However, on the same day, the matter was dropped from the list of business.

Later, the matter was listed for hearing before a bench headed by Justice Mishra, who is already dealing with two separate contempt cases against Prashant Bhushan.

The top court sources had said that along with the fresh petition, Arun Shourie, N Ram and Prashant Bhushan also moved an application seeking stay on the proceedings in the two contempt cases pending against the activist lawyer.

The petition had challenged the validity of Section 2(1)(c) of the Contempt of Courts Act, 1971 as being vague, unconstitutional and incompatible with the basic features of the Constitution.

The provision defines what constitutes criminal contempt and says that if by way of publication of words, the dignity of the courts is lowered and if they scandalize the courts then the offence of contempt of court is deemed to have been committed.

The petition alleged the provision violated the freedom of speech and expression.

The filing of the plea challenging the validity of the provision assumed significance in view of the fact that a bench headed by Justice Mishra on July 22 had issued a show cause notice to Bhushan after taking note of a petition urging it to initiate criminal contempt proceedings against him for his alleged tweets against the judiciary.

The Supreme Court had on August 5 reserved its verdict on the suo motu contempt case against Prashant Bhushan.

The top court is also seized of another criminal contempt case against Prashant Bhushan which was initiated in 2009 over his alleged comments against former CJIs in an interview given to a magazine.

The top court on August 10 had said further hearing was required in the 2009 criminal contempt case against Bhushan and journalist Tarun Tejpal to examine whether comments on "corruption" against judges per se amounted to contempt or not.