Read inOther Languages
This Article is From Apr 06, 2019 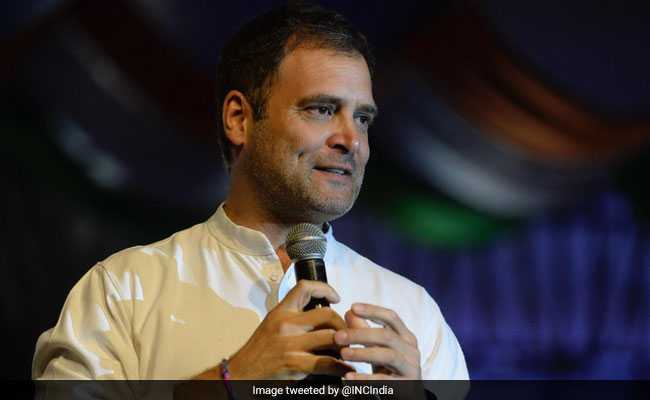 Mr Gandhi, during an interaction with the students of different institutions, said, "I love Modi; genuinely have no hatred or anger towards the man. He has anger towards me."

"No problem," Mr Gandhi replied as the students continued to chant the Prime Minister's name.

Shortly after his interaction with students, he said he loves everybody, including those ''temporarily blinded by hatred''.

"Hatred is cowardice. I don't care if the entire world is full of hatred. I am not a coward. I will not hide behind hate and anger. I love all living beings, including those temporarily blinded by hatred," he tweeted.

I don't care if the entire world is full of hatred. I am not a coward.

I will not hide behind hate and anger.

I love all living beings, including those temporarily blinded by hatred.

At the Pune interaction with students, the Congress chief was asked questions ranging from the state of the economy, unemployment, demonetisation, NYAY scheme and several personal life questions related to his biopic, sister Priyanka Vadra and memories with his grandmother Indira Gandhi.

The event was one of the many interactions Rahul Gandhi has lined up as part of his campaign for the national election that starts next week.

This was not the first time Mr Gandhi spoke of having ''affection'' for PM Modi.

After a fiery speech in Parliament in October last year, Mr Gandhi had done something unprecedented: He had walked up to PM Modi and hugged him.

In March this year, during interaction in a Chennai college, a student asked him why he chose to hug the Prime Minister, Mr Gandhi had said he had watched a ''very angry'' Modi in Parliament running down his party, his late father Rajiv Gandhi and mother Sonia. He then said that he could not hate him since love "is in the country's grain, every religion, and the Tamil people".