Student shares Mamata Banerjee cartoon on Facebook, but Trinamool Congress plays it down 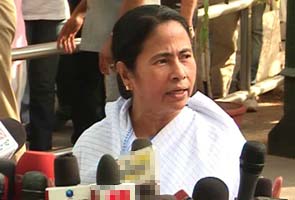 Kolkata: A college student in Kolkata is facing a police complaint for sharing cartoons of Mamata Banerjee on his Facebook account. But the West Bengal Chief Minister's party, the Trinamool Congress, appears to have learnt its lessons from a similar episode last year and is showing restraint.

The complaint against Ramnayan Chowdhury, a member of the CPM students' union, was filed by a Trinamool activist on Friday.

But Trinamool MP Derek O'Brien hinted the party was not taking the complaint seriously. "A young, over enthu TMC boy filed a general diary against cartoons he found offensive. He obviously needs to tune up his sense of humour," he tweeted.

Last April, Jadavpur University Professor Ambikesh Mahapatra was allegedly heckled by Trinamool workers and arrested for forwarding a cartoon lampooning Mamata Banerjee and Mukul Roy on Facebook. There was massive public outcry against the Trinamool Congress and the police.

This time, the police have not acted against Mr Chowdhury, who also shared a cartoon lampooning cricketer MS Dhoni.

Promoted
Listen to the latest songs, only on JioSaavn.com
While he says he still fears a backlash from Trinamool workers, he could take heart from another Derek O'Brien tweet: "Internet skirmishes have to be settled on the internet..."