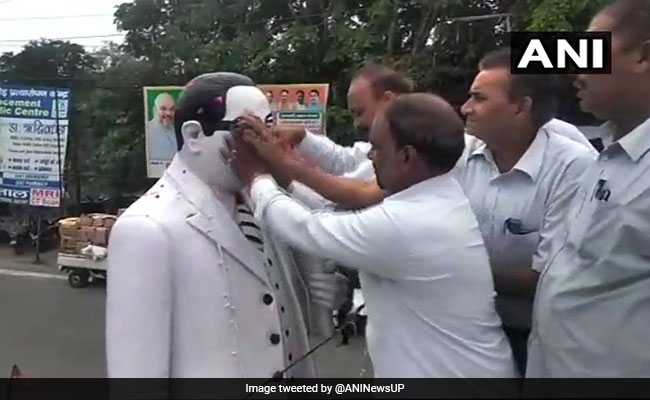 A group of Dalit lawyers in Meerut, Uttar Pradesh "purified" the statue of BR Ambedkar with milk and 'gangaajal' (holy Ganga water) soon after it was garlanded by Bharatiya Janata Party's state secretary Sunil Bansal on Friday.

The lawyers said that the statue placed near the district court became "dirty" after Mr Bansal garlanded it.

"We are purifying this statue because Rashtriya Swayamsevak Sangh's Rakesh Sinha came and garlanded it. BJP government oppresses Dalits. They have nothing to do with Ambedkar, but still they use his name just to promote their party and allure the Dalit community," a lawyer told ANI.

Mr Ambedkar, a  Dalit icon, extensively campaigned against social discrimination against untouchables and also supported the rights of women and labourers.

Earlier this month, a temple inside an ancient ashram in Uttar Pradesh's drought-hit Bundelkhand region was "purified" with water from the river Ganga and its idol was sent for a holy dip in Allahabad for purification after the visit of Bharatiya Janata Party MLA Manisha Anuragi.

Ms Anuragi had walked into the temple and prayed, not knowing then that it would cause some commotion. Locals said women were not allowed inside the temple and could only pray from outside.