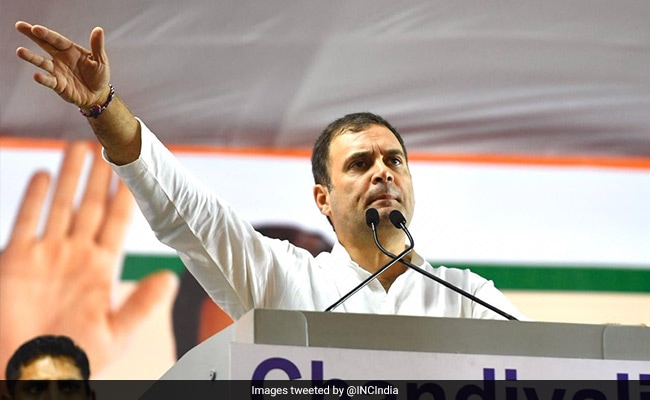 Haryana and Maharashtra Assembly Election: Both BJP and Congress are campaigning in the two states.

Former Congress president Rahul Gandhi addressed rallies in Maharshtra's Yavatmal and Wardha. Mr Gandhi attacked PM Narendra Modi over a range of issues in his address. In Yavatmal, Mr Gandhi accused the Bharatiya Janata Party of pursuing wrong economic policies like demonetisation and Goods and Services Tax, resulting in joblessness. He said poor people were the worst affected by the government's decision of demonetisation and implementation of the Goods and Services Tax (GST).

Earlier, Prime Minister Narendra Modi addressed mega rally in Charkhi Dadri and is headed to Kurukshetra in Haryana for the second rally today. PM Modi addressed the first of his four grand rallies in Ballabhgarh on Monday. His last rally in the state will be in the Jat-dominated Hissar on October 18, a day before the last day of election campaigning.

Congress leader Rahul Gandhi will hold two public meetings ahead of Assembly polls in Maharashtra on Tuesday. Mr Gandhi is scheduled to conduct rallies at Wani Vidha Sabha of Yavatmal district and Arvi Vidhan Sabha of Wardha district at 1 pm and 3:40 pm respectively.

Both BJP and Congress are campaigning in poll-bound Haryana and Maharashtra. The two states vote on October 21 and counting of votes will take place on October 24.

Here are the LIVE Updates of the Assembly Election Campaigns in Haryana and Maharashtra:

Oct 15, 2019 16:25 (IST)
Through MNREGA, we had put ₹ 35,000 crore into the pockets of the poor, waived off farm loans of ₹ 70,000 crore. When the poor have money in their pockets, they start spending which increases demand and boosts the economy: Rahul Gandhi in Wardha

Oct 15, 2019 12:41 (IST)
Haryana Chief Minister Manohar Lal Khattar who is seeking re-election from Karnal, has toured aggressively across the state with 1.8 crore voters and during his campaigning has been harping on state's overall development, nationalism. "This is our Sankalp Patra (manifesto) for the next five years. It is time for our examination now. People will give the result. After five years, we will again appear in exams on the performance of this Sankalp Patra only," he said.
Oct 15, 2019 11:33 (IST)
Haryana Chief Minister Manohar Lal Khattar to address rallies in three cities
Haryana Chief Minister Manohar Lal Khattar will be addressing rallies in Sonipat, Kurukshetra and Gurugram. "I will give a report card of the development work done for every section of the society in the last 5 years. All of you are cordially invited," he tweeted.
Oct 15, 2019 11:30 (IST)

Oct 15, 2019 11:25 (IST)
Manohar Lal Khattar attacks Congress manifesto
Like the BJP, the Congress has also named its manifesto as a resolution letter, but they do not realise that a government is not formed bu changing names of the manifesto, instead by working towards development, Mr Khattar said.
Oct 15, 2019 11:15 (IST)
Congress Leader Rahul Gandhi Will Address Rallies In Maharashtra's Yavatmal and Wardha Districts

I will be in Maharashtra today to address 2 public meetings as per the schedule in the graphic below.

You can also watch these meetings live on my Facebook page : https://t.co/NraAer1ksfpic.twitter.com/iuiz8huiH4

Oct 15, 2019 11:10 (IST)
We are committed to bringing the poor, villages, farmers, tribals and other backward classes into the mainstream: JP Nadda

This Sankalp Patra is a very well-studied & serious document and not just a piece of paper.

Oct 15, 2019 11:04 (IST)
After a long time, Maharashtra has seen a CM serve his full term, under the leadership of Devendra Fadnavis
Five years back, Maharashtra was a state that was tainted and full of corruption, there was unstability. The seat of the CM was like musical chairs and it was misgoverned: JP Nadda
Oct 15, 2019 11:02 (IST)
Devendra Fadnavis has changed basic fundamentals of politics in Maharashtra: JP Nadda

Today I can say with confidence that Shri Devendra Fadnavis has changed the political culture of Maharashtra.

He has changed the basic fundamentals of politics in Maharashtra- Shri @JPNadda#BJPMahaSankalpPatrahttps://t.co/0innrFOaCxpic.twitter.com/1mkWJt4eSg 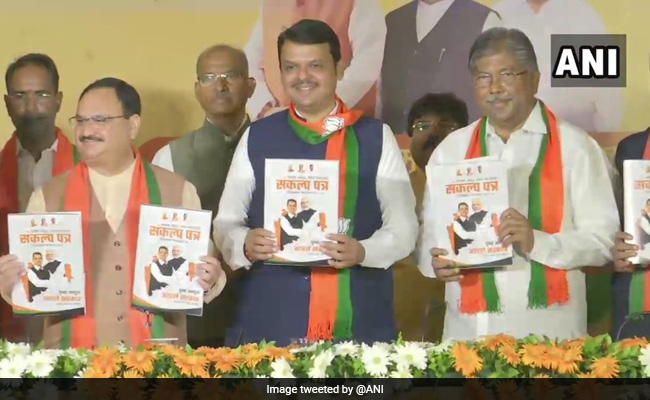 Oct 15, 2019 10:00 (IST)
BJP has a strong team: PM Modi
Launching a broadside against the Congress, Prime Minister Narendra Modi on Monday while addressing a rally in Ballabhgarh said while the opposition parties in Haryana are crumbling, the BJP has a strong team and "a strong captain" in Chief Minister Manohar Lal Khattar.
Oct 15, 2019 09:55 (IST)
BJP manifesto
In its manifesto titled ''Mhare sapno ka Haryana'' (my dreams of Haryana), the BJP has made promises ranging from launching Haryana start-up mission, constitution of a new ''Yuva Vikas and Rozgar'' ministry and one All India Institute of Medical Sciences (AIIMS), doubling of farmers'' income by 2022 and increase in pension.
Haryana Assembly Elections 2019PM ModiRahul Gandhi