Foreign Minister S Jaishankar indicated that Indo-Lankan relations should not be limited to a single issue. 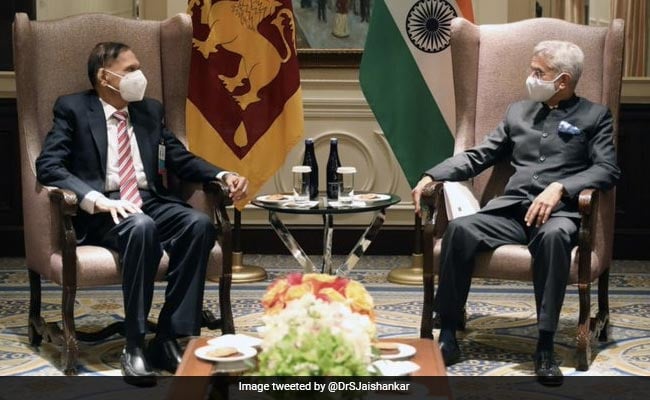 The two leaders met on Thursday on the sidelines of the UN General Assembly session.

During the meeting with Peiris in New York, Mr Jaishankar indicated the need for a fair and just resolution of residual issues in the aftermath of the ethnic issues is in the interest of both countries, the Sri Lankan Foreign Ministry said in a statement.

However, the Indian Foreign Minister indicated that Indo-Lankan relations should not be limited to a single issue, it said.

Minister Peiris conveyed to the Indian Foreign Minister about the pragmatic and tangible action taken by the Sri Lankan government to resolve residual matters after the end of the conflict in May 2009, it said.

He said that the Foreign Ministry, Defence Ministry and Justice Ministry were working collaboratively to address key issues, such as revisiting the Prevention of Terrorism Act (PTA), releasing of LTTE prisoners, and empowering independent institutions such as the Office of Missing Persons, Office for Reparations, Office of National Unity and Reconciliation, the Human Rights Commission of Sri Lanka and the SDG Council.

The Liberation Tigers of Tamil Eelam (LTTE) waged a war with the Sri Lankan government to carve out a separate Tamil homeland with the conflict ending in 2009 when the government forces killed its chief Velupillai Prabhakaran.

Tamil and human rights groups have pointed to the draconian nature of the PTA which was enacted in 1979 during the early days of the LTTE militancy. During the LTTE's armed campaign, many LTTE activists were held under the PTA.

According to the Lankan government figures, over 20,000 people are missing due to various conflicts including the three-decade brutal war with Lankan Tamils in the north and east which claimed at least 100,000 lives.

The Tamils alleged that thousands were massacred during the final stages of the war.

The Sri Lankan Army denies the charge, claiming it as a humanitarian operation to rid the Tamils of LTTE's control.

At the end of the civil war, the United Nations accused both sides of atrocities, especially during the conflict's final stages.

International rights groups claim at least 40,000 ethnic Tamil civilians were killed in the final stages of the war, but the Sri Lankan government has disputed the figures.

Mr Peiris said that substantial progress had been made on many fronts and that efforts were continuing, the statement said.

Mr Peiris also expressed a strong political will to move forward in many different areas of bilateral relations between India and Sri Lanka.

He, however, emphasised that Sri Lanka cannot accept any external mechanisms active on the ground when robust domestic mechanisms are vigorously moving forward.

His comments came as the UN Human Rights Council (UNHRC) recently announced in Geneva that they are in possession of some 120,000 pieces of evidence on alleged abuses committed by Sri Lankan troops during the final phase of the conflict.

In March, the UNHRC adopted a resolution against Sri Lanka's rights record, giving the UN body a mandate to collect evidence of crimes committed during the country''s brutal three decade-long civil war against the LTTE.

He said that Sri Lanka was greatly encouraged by many nations standing firmly with the principled position taken by Sri Lanka that resolutions against countries cannot work without the consent of those countries, the statement said.

Mr Jaishankar during his visit to Sri Lanka in January had said it was in the interest of the neighbouring country that the expectations of the Tamil people "for equality, justice, peace and dignity" are fulfilled.

Mr Jaishankar said that India is willing to work with Sri Lanka in many different ways, including enhancing people to people contacts. He also highlighted the need to engage with all stakeholders, including different political parties.

He further emphasised the need for a practical conclusion of the number of projects pending implementation, indicating that it would give more confidence to New Delhi to move forward in enhancing relations.

"Pleased to meet Sri Lankan Foreign Minister G.L. Peiris, this time in his new capacity. A comprehensive discussion on our close relationship. Look forward to working with him to advance our shared agenda," Mr Jaishankar tweeted after the meeting.