Sri Lanka Blasts: Dozens of other foreigners, including those from the UK, US, Japan and the Netherlands are believed to be among those dead. 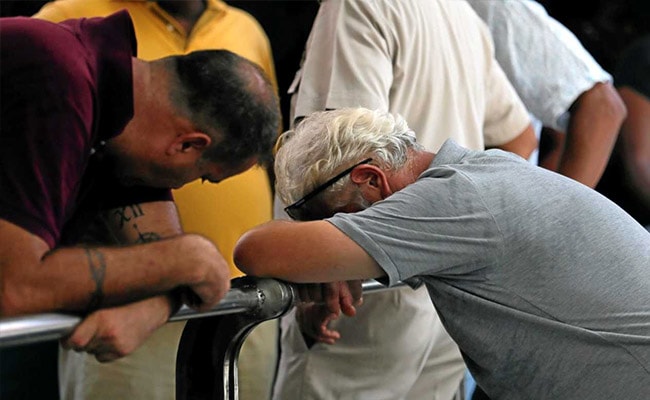 Foreign relatives of a victim of the explosion react at the police mortuary in Colombo. (AFP)

Five Indians are among the 290 killed in a series of blasts that which struck Sri Lanka on Sunday, in the worst violence to hit the island nation since the civil war that ended a decade ago. The powerful blasts - six in quick succession on Easter morning and then two more hours later - wounded around 500 people and left the country grieving.

This morning, the Indian embassy in Colombo identified two Indians killed in the blasts as G Hanumantharayappa and M Rangappa. Foreign Minister Sushma Swaraj had identified three other Indians killed as Lakshmi, Narayan Chandrashekhar and Ramesh. "Indian High Commission in Colombo has conveyed that National Hospital has informed them about the death of three Indian nationals," she said in a tweet on Sunday evening.

@SushmaSwaraj
We sadly confirm the deaths of the following two individuals in the blasts yesterday:
- K G Hanumantharayappa
-M Rangappa.

Four members of the Janata Dal (Secular) are among those killed. They were part of a seven-member team from the party touring Sri Lanka. In a series of tweets, Karnataka Chief Minister HD Kumaraswamy shared the names of his partymen.

"The Chief Secretary's office is in constant touch with the Resident Commissioner at Karnataka Bhavan, New Delhi, and the families of the victims and the missing persons for further information on them," Mr Kumaraswamy tweeted.

A sixth name - PS Rasina , a woman from Kerala - was given out by Kerala Chief Minister Pinarayi. Neither Ms Swaraj nor the Indian High Commission, however, have shared this name.

Dozens of other foreigners, including those from the UK, US, Japan and the Netherlands are believed to be among those dead.

24 people from the minority Muslim community have been arrested. The Lankan government did not share etails of the suspects involved in the attacks. "Don't give extremists a voice. Don't help to make them martyrs," said Ruwan Wijewardene, State Minister of Defence.

Police said the van which had carried explosives to carry out bomb attacks at the three hotels was arrested with its Muslim driver. A safe house where the bombers had lived for nearly three months leading to the attacks were discovered in the south of Colombo suburb of Panadura.

A curfew has imposed in Colombo from 8 pm to 4 am tomorrow as precautionary measure. The first curfew, that was imposed on Sunday across Sri Lanka, was lifted early this morning.

Sri Lanka's small Christian minority -- just six percent of the 21 million-strong population -- has been targeted by violence in the past, but never to such brutal effect.