SD Biosensor, a bio-diagnostic company, has started production from Manesar with a capacity to churn out 5,00,000 rapid test kits per week, Indian embassy said. 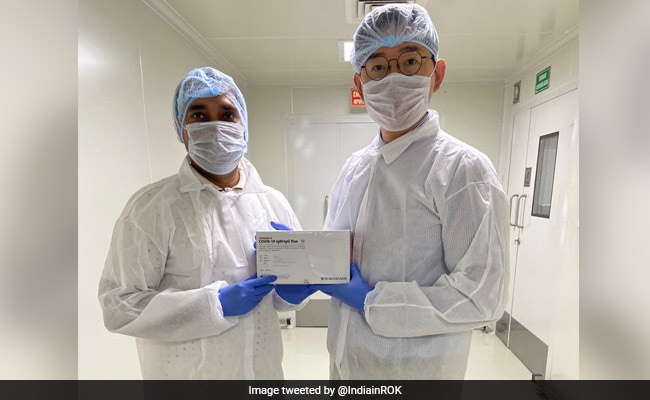 India has signed a deal with South Korean firm M/s Humasis Ltd for the supply of 500,000 tests to ICMR

The tweet said SD Biosensor -- a bio-diagnostic company -- has` started production from Manesar with a capacity to churn out 5,00,000 rapid test kits per week.

"SD Biosensor has just started production from its Manesar facility with a capacity of 500,000 rapid test kits per week. This will be further enhanced in coming weeks to meet growing demand," the tweet read.

Mr Young-shik Cho, Chairman of SD Biosensor called on @ambsripriya to discuss the company's activities and plans for dealing with COVID-19 pandemic. @MEAIndia@mofa_kr@MOTIEKoreaEng@SDBIOSENSOR_PR@PIB_India@MoHFW_INDIApic.twitter.com/wA3ZcuZQtq

There were also tweets about the ambassador's visit to the manufacturing facility of SD Biosensor.

The series of tweets started after Chhattisgarh minister TS Singh Deo tweeted about the state's decision to procure Rapid Testing Kits from the Korean firm.

"We are procuring 75,000 high quality rapid testing kits at a benchmark price of ₹337 + GST from a South Korean company based in India, which has proven to be the lowest bidder. The rate we have been able to close at is the lowest in India," the minister's tweet read.

In response, the ambassador tweeted:

So glad to know that this has fructified, Sir! We stand ready to support you and all other Indian agencies in whatever way possible @IndiainROK@MEAIndia@MOFAkr_enghttps://t.co/bLGIRsb7Dq

India has also signed a deal with South Korean firm M/s Humasis Ltd for the supply of 500,000 tests to Indian Council of Medical Research, the embassy tweeted.

Aggressive testing was the way South Korea got the upper hand over the highly contagious virus, which has so far infected more than 18,000 people in India.

Worldwide, more than 24 lakh people have coronavirus, nearly 170,000 have died. US has reported the highest number of COVID-19 cases with 230,000 cases, more than 42,000 deaths have been reported from the country.