The Congress-led UDF is seeking to wrest power back from the left-led LDF in the southern state. 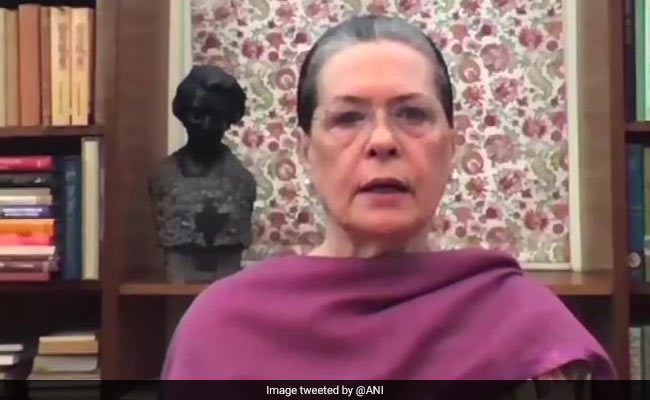 Congress president Sonia Gandhi on Monday urged the people of Kerala to vote for the United Democratic Front (UDF) alliance in the Assembly polls and "defeat the divisive forces who polarise the society, and reject authoritarian leaders".

Kerala is all set to go to polls on Tuesday with 2.74 crore voters eligible to exercise their franchise and decide the fate of 957 candidates in 140 Assembly constituencies across the state.

Asserting that Congress can confront divisive forces which are destroying what India stands for, Mrs Gandhi urged the voters to strengthen her party nationally by supporting it in the Kerala polls.

"By voting for the UDF in Kerala you will also be voting to strengthen the Congress party nationally. The Congress can confront the divisive forces who are damaging and destroying all that India has stood for and represented for twenty centuries and more," she said.

The Congress-led UDF is seeking to wrest power back from the left-led LDF in the southern state.

"By voting for the UDF, you will be ensuring that development takes place in an atmosphere of social harmony and communal peace. The UDF will provide an administration that is transparent, responsive and accountable to the people of Kerala," Mrs Gandhi also said.

The Congress chief assured the people that if elected, the party would implement the "Nyay scheme" in Kerala, that would ensure a guaranteed monthly income for each family in the state, particularly for families belonging to the poor and disadvantaged sections.
"The Congress will make the 'NYAY SCHEME' the edifice of the next UDF government," she said.

Mrs Gandhi said over the past year, the entire country has experienced acute pain and distress caused by the COVID-19 pandemic.

"If this pain and distress has been managed to an extent, it is because of programmes launched by the Congress-led UPA like the Mahatma Gandhi National Rural Employment Guarantee Act, women's self-help groups and social security schemes," she noted.

Mrs Gandhi expressed confidence that on April 6, the people of Kerala will reject the forces "who know nothing else other than polarizing and dividing our society of so many diversities".

"I am confident that you will reject authoritarian and dictatorial leadership and once again place your trust and confidence in the Congress and the UDF," she appealed.

Mrs Gandhi told the people that their vote would determine who will form the next government in Kerala and a vote for the UDF is a vote for the future of Kerala and for preserving its democratic traditions and its secular values.

She also said that a vote for the UDF is a vote for bringing Kerala back on the path of development that preserves and protects its wonderful natural heritage and that ensures that development does not result in greater natural disasters like landslides and floods.

"So Tragic": Canadian PM After Indian Family Of 4 Freezes To Death Near Border