At the change of guard event, Sonia Gandhi said, "I did my duty to the best of my ability. Today, I will be freed of this responsibility. A weight is off my shoulder. I feel a sense of relief." 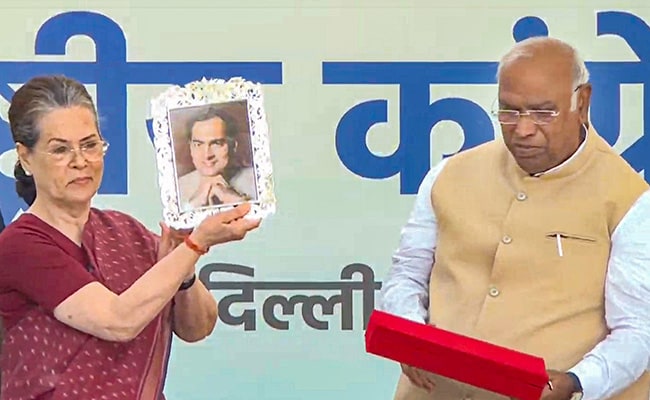 Sonia Gandhi today said she felt "relieved" as Mallikarjun Kharge officially took over as Congress president, a post she held for nearly 23 years.

"I did my duty to the best of my ability. Today, I will be freed of this responsibility. A weight is off my shoulder. I feel a sense of relief," Sonia Gandhi said at the change of guard event.

Sonia Gandhi said the biggest challenge today was the crisis of democratic values in the country.

"The Congress faces many challenges. The challenge is how we face it. With full strength, unity, we have to move forward and succeed," she told a gathering of Congress leaders.

Critics questioned the fairness of the election, suggesting that Mr Kharge, as the "Gandhis -approved candidate", was sure to win.

Many also allege that Mr Kharge will act as the proxy for the Gandhis, who are not in the contest for the Congress top post for the first time in 25 years.

The Congress has rubbished these allegations, insisting that its election was a big success and was proof of democratic values in the party.

Thanking Mrs Gandhi for her contribution in leading the party, Mr Kharge said, "I remember January 15, 1998. That day, while speaking at Bangalore's National High School ground, you had said in your first public rally that you are taking diksha (initiation) of politics in Karnataka. Since then, you have managed Congress selflessly, working round the clock. You are an unparalleled example of sacrifice in an era when people are in politics only for power."

"Sonia Gandhi was always truthful, the example set by her is unparalleled. Under her leadership, two UPA governments were formed, and the jobs scheme (MGNREGA), the Food Security Act, RTI (Right to Information) Act were enforced during those governments," Mr Kharge said.