It said following the resignation of Uddhav Thackeray from the Chief Minister's post, there was no "state of law" left in Maharashtra. 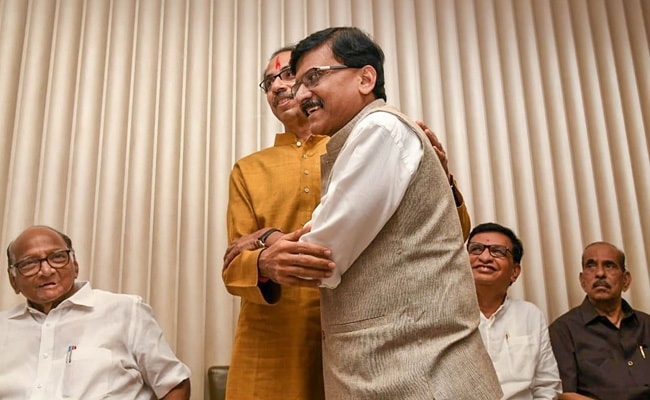 The Shiv Sena on Monday said it was not surprising to see the BJP winning the Maharashtra Assembly Speaker's election as the Sena was broken and "someone from the party" was pitted against it.

In satirical comments, an editorial in the Sena mouthpiece 'Saamana' also said with the new government (led by Chief Minister Eknath Shinde) in the state, the issue of nomination of 12 MLCs from the governor's quota will be resolved soon.

The old file (sent by the previous Uddhav Thackeray-led government) will be replaced with a new one and it will be cleared by the governor within 24 hours, it claimed.

If "protectors of the Constitution" take a dual stand, these people can make any resolution and win any election, it said, without taking any name.

It said following the resignation of Uddhav Thackeray from the Chief Minister's post, there was no "state of law" left in Maharashtra.

"Though this is a tough time, it too shall pass," the Marathi daily said.

"Like the present Chief Minister (Eknath Shinde), (present Assembly Speaker) Rahul Narvekar was also a Shiv Sainik. In his journey from the Shiv Sena, NCP to the BJP and now as Speaker of the Maharashtra Assembly, he perfectly knows when to go and where to go," the editorial said.

"It is not surprising to see the BJP winning the Maharashtra Assembly Speaker's election as the Sena was broken and someone from the party was pitted against it," the Marathi publication said.

"The BJP-sponsered MLAs of the Shinde group did not follow the party's whip and action of disqualification will start, but to avoid that, the BJP has made a person having legal knowledge as the Speaker, and now they will take convenient decisions," the Sena mouthpiece claimed.

It said when a petition seeking disqualification of 16 MLAs (of the Shinde group) is under consideration before the Supreme Court, it is illegal to allow them to take part in the voting process.

It also took a dim view of the heavy security deployed when MLAs from the Shinde group arrived in a south Mumbai hotel from the airport (two days back from Goa).

"Now, the Air Force and Navy are left to be used," the Sena quipped, adding that such arrangements were not there even for Kasab's security.

Pakistani terrorist Mohammed Ajmal Kasab was caught alive during the 26/11 Mumbai terror attack in 2008 and hanged to death at Pune's Yerwada central prison, less than a week before the fourth anniversary of the carnage.

The editorial also claimed that the "scared" look on the faces of these MLAs (of the Shinde group) was apparent when they came to the Assembly (on Sunday) for the Speaker's election.

It said the Speaker's election was illegal and not in accordance with democracy and ethics. "It was not at all surprising to see the governor taking part in the immoral act," it said.

The Maha Vikas Aghadi (MVA-comprising the Shiv Sena, NCP and Congress) had sought permission (when it was in power) from the governor to conduct the Speaker's election, but the permission was denied, citing the issue was sub-judice, the Sena said.

"Why the same rule is not applied now?" it sought to know.

It also stated that the Speaker's election was done through headcount (of legislators in the House), but when the MVA was in power, they (BJP) wanted the secret ballot method.

Notably, in a previous legislature session, the then MVA government had amended the existing rules to facilitate the Speaker's election through a voice vote. The governor had described the decision as unconstitutional and sought legal opinion.

On Monday, the editorial in Saamana asked, "Which Constitution book the governor has, Dr Ambedkar's or any other?" It seems Governor Bhagat Singh Koshyari was happy over the dismissal of the Thackeray government. "The happiness was akin to the joy the British felt when they executed (Indian freedom fighter) Bhagat Singh," it claimed.

In that happiness, he (the governor) offered sweets to Shinde (when he was sworn in as the CM). He had not looked happy when Uddhav Thackeray became the CM (in 2019), the editorial said.