Skydiver's Birthday Wish To PM Modi From 13,000 Feet Above

After the successful jump, Shital Mahajan, 35, uploaded a video of her unique birthday greeting on social networking site Facebook. 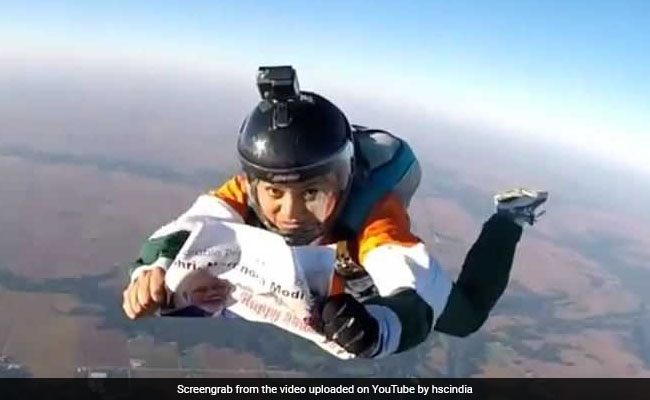 Shital Mahajan said she was trying to meet PM Modi for the last four years, but in vain

Parajumper Shital Mahajan jumped off a plane from a height of 13,000 feet holding a birthday message for Prime Minister Narendra Modi in Chicago, USA on Monday.

After the successful jump, Ms Mahajan, 35, uploaded a video of her unique birthday greeting on social networking site Facebook.

Ms Mahajan, a Padma Shri awardee, said she was trying to meet PM Modi for the last four years, but in vain.

"I have been trying to meet the prime minister for the last four years but received no response from his office. I am hopeful of getting some response after this jump," Ms Mahajan said in a message on the internet.

PM Modi celebrated his 68th birthday today with everyone across the country wishing the BJP supremo.

PM Modi had an interaction with school students in his Lok Sabha constituency Varanasi during which he told them never to feel afraid to ask questions, saying it is a key aspect of learning.

A giant, 568-kg ladoo was unveiled on the occasion of Prime Minister Narendra Modi's 68th birthday on Monday by Union Minister Prakash Javadekar and his cabinet colleague Mukhtar Abbas Naqvi.