Situation worsens in Assam, half the state flood hit 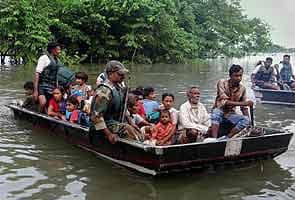 The flood situation in Assam worsened today with the water level of the Brahmaputra and its tributaries continuing to rise, leaving 15 lakh people affected and 1,972 villages in 16 districts submerged.

In the Majuli island in Jorhat district, flood water inundated the sub-divisional office and the Majuli jail from where 41 prisoners were shifted to the Jorhat Central Jail in a special ferry yesterday, officials said.

Nine of the famed Satras (Vaishnavite monasteries) and 40 educational institutions in Majuli have also been submerged by the Brahmaputra. Over 70 per cent of Majuli's 890-square kilometre landmass remained under water.

A total of 166 relief camps have been set up across the state for flood-affected people. Over 2.31 lakh people have taken shelter in the camps.

The Brahmaputra River is above the danger level at Dibrugarh, Nematighat, Tezpur, Dhubri, Guwahati and Goalpara.

Similarly, the Burhidehing is flowing above danger level at Khowang in Dibrugarh district, the Subansiri at Badatighat in Lakhimpur, the Dhansiri at Numaligarh in Golaghat and the Jia Bharali at N T Road Xing at Sonitpur.

Assam Chief Minister Tarun Gogoi yesterday directed the administration to use helicopters and mechanised boats to step up rescue and relief operations in the flood-hit state.

Mr Gogoi, who is in Japan, spoke to revenue minister Prithibi Majhi, water resources minister Rajib Lochan Pegu and Chief Secretary Naba Kumar Das over the phone and directed them to step up rescue and relief operations.

The chief minister has directed adequate food materials be supplied to the flood-affected areas and asked all ministers in his Cabinet to visit the affected districts immediately and oversee relief and rescue operation.

Troops of the Tezpur-headquartered Gajraj Corps of the Indian Army provided relief to more than 6,000 flood-affected people in Sonitpur district in central Assam, besides distributing 2.5 tonnes of food packets.

Among the worst-affected are Dhemaji district in upper Assam where 622 villages have come under the impact of the flood.

Parts of National Highway 52, which connects Dhemaji and Arunachal Pradesh, has come under flood water and there are fears of scarcity of food and other material in the district.

In Guwahati also, rising waters of the Brahmaputra have submerged areas of Pandu and Adabari localities in the western part of the city.

Most of the Kaziranga National Park in Golaghat district lay under water and wildlife, including the world-famous one-horned rhinos, are moving towards higher grounds.

A one-horned rhino was killed by poachers in Disbalu Chapori in Kaziranga. The poachers reportedly chopped off the rhino's horn.

Over 70 per cent of the Pobitora Wildlife Sanctuary in central Assam's Morigaon district was also submerged with as many as 18 of the 22 guard camps in the sanctuary going under water.

Promoted
Listen to the latest songs, only on JioSaavn.com
However, there is no report of any loss of wildlife in the Pobitora sanctuary.