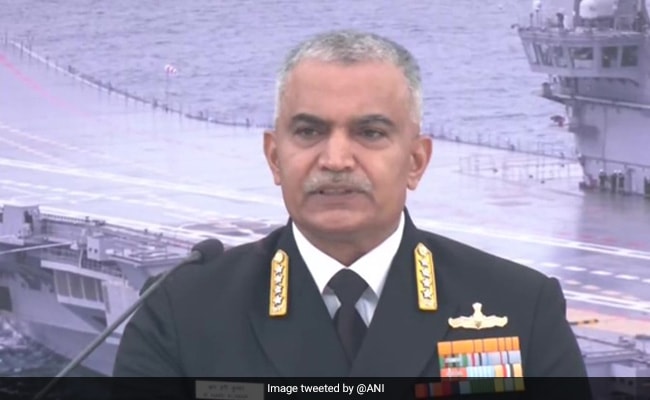 Highlighting that the situation on the country's northern borders and COVID-19 have created two complex challenges, Indian Navy Chief Admiral R Hari Kumar today said that the Navy is ready to tackle both challenges.

Addressing the press conference in Delhi today, Admiral Kumar said, "The situation on our northern borders and COVID19 have created two complex challenges and the Indian Navy is ready to tackle both challenges," he said.

He said the Indian Navy has a ten-year road map with a plan to have indigenous unmanned airborne, underwater and autonomous systems.

The Navy chief said that the Indian Navy is confident of defending India's maritime interests.

"We are aware of the development of the Chinese navy building 110 warships in the last few years. Our plans will factor in all the activities and deployments in the IOR (Indian Ocean Region). I want to assure you that the Indian Navy is confident of defending India's maritime interests," he said.

"The Chinese navy has been present in Indian Ocean Region since 2008 and they have seven to eight warships here. There is constant surveillance by our aircraft and ships and their activities are kept under close watch," the Navy Chief said.

Of the 39 warships and submarines being built for the Indian Navy, Admiral Kumar informed that 37 are being built in India under 'Make in India' showing our quest for Atmanirbhar Bharat.

"We have taken measures to provide additional opportunities to women officers. The first women Provost officer joined in March this year. Navy is ready to induct women in different capacities," he said.

Hari Kumar, who took charge as Navy Chief on Tuesday, said that the creation of the Department of Military Affairs (DMA) is the biggest reform in the military since independence along with the creation of the post of Chief of Defence Services (CDS).

"The creation of the Department of Military Affairs (DMA) is the biggest reform in the military since independence along with the creation of the post of CDS. This enables faster decision-making and fewer layers of bureaucracy," he added.