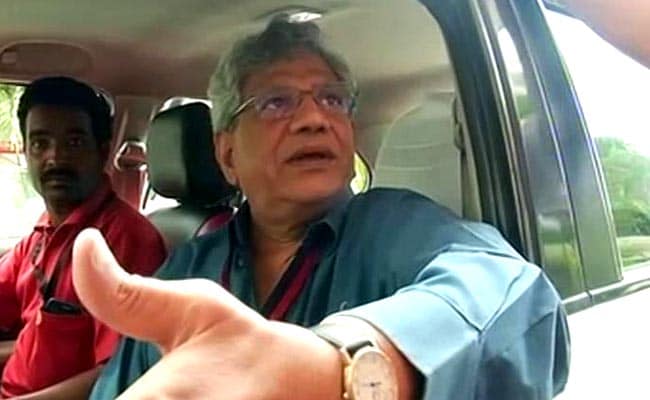 New Delhi: The CPM - which recently voted to rule out any electoral deal with the Congress -- today started an effort to build consensus among opposition parties for an impeachment motion in parliament against Chief Justice of India Dipak Misra. Impeachment of the Chief Justice of India is a complicated process that involves a presidential order backed by majority support in both houses of parliament for an address and a vote.

Mr Yechury --- whose proposal for joining forces with the Congress in the battle against the BJP was shot down by his party in a vote on Sunday -- said he has already met NCP leader Tariq Anwar and rebel JD(U) leader Sharad Yadav.

At an unprecedented press conference on January 12, four of the most senior judges of the Supreme Court said their decision to go public was motivated in part because cases of "far reaching consequences" were being assigned inappropriately by the Chief Justice of India, who is the 'Master of the rolls".

Mr Yechuri said it was time the legislature and the executive come together to resolve the issue, since the judiciary has been unable to address it.

"Suggestions have come from other opposition parties that we should consider an impeachment motion. Discussions are on," Mr Yechury was quoted as saying by news agency Press Trust of India. "By the time the parliament session begins on January 29, something concrete will emerge," he added.

The Article 124 (4) of the Constitution outlines the process of impeachment for the Chief Justice of India on the ground of proven misbehaviour or incapacity. "A Judge of the Supreme Court shall not be removed from his office except by an order of the President passed after an address by each House of Parliament supported by a majority of the total membership of that House and by a majority of not less than two-thirds of the members of that House present and voting has been presented to the President in the same session," the article says.

To kickstart the process, 50 members of Rajya Sabha or 100 members of the Lok Sabha need to sign the motion.

The opposition is a minority in the Lok Sabha, where the ruling NDA enjoys an overwhelming majority. In the 245-member Rajya Sabha, the BJP recently outstripped Congress to become the largest party.  The CPM had 7 seats in Rajya Sabha, the NCP has 5. Sharad Yadav was disqualified from the Rajya Sabha following his rebellion last year.

Promoted
Listen to the latest songs, only on JioSaavn.com
The Congress till now is not inclined to taking the impeachment route, sources in the party have said. The government had indicated that the rift is an internal matter of the judiciary. Prime Minister Narendra Modi recently said the judiciary is capable of resolving it and the government and political parties must stay out.

Several rounds of meeting have already been held between Chief Justice Dipak Misra and the four judges, and sources said the "ice is being broken", though a final resolution is yet to be arrived at.