Prime Minister Narendra Modi was speaking to party members who had come to the Chennai airport to receive him. 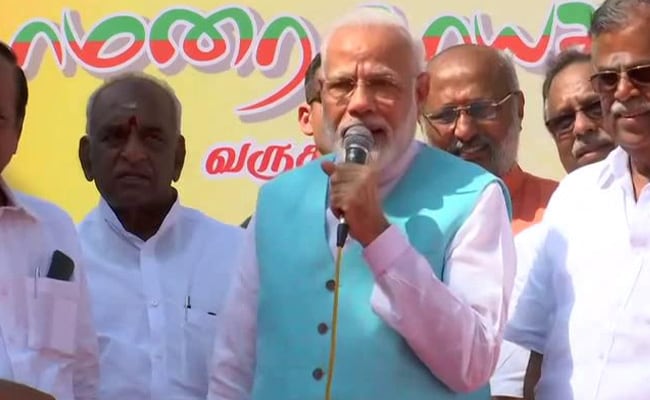 This is PM Narendra Modi's first visit to Tamil Nadu after 2019 elections. (File)

Prime Minister Narendra Modi on Monday said he was not against the "use of plastic but was against single-use plastic."

He said the message against single-use plastic should be taken to the people across the country during the padayatra to be undertaken as part of 150th birth anniversary of Mahatma Gandhi.

"It is always a delight to be back in Chennai. 'Chennai Makkallaii Santhippathil Magizhchi' - happy to meet people of Chennai," he said.

This is the prime minister's first visit to Tamil Nadu after 2019 elections. PM Modi said his mention of Tamil poet Kaniyan Pungundranar's statement has gathered headlines in American media.

During his speech at the 75th UN General Assembly, PM Modi highlighted India's message of inclusiveness, quoting the Tamil poet who lived some 3,000 years ago, "We belong to all places and we belong to everyone."

"The sense of belonging beyond borders is unique to India," he had said.

The prime minister was here to attend the 56th convocation of Indian Institute of Technology, Madras (IITM) and also participate in the prize distribution function of the Singapore-India Hackathon 2019 at the institute.