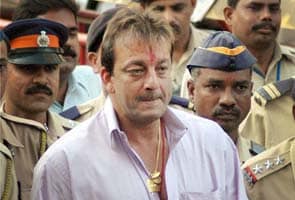 Mumbai: The Shiv Sena has refused to join the "pardon Sanjay Dutt" chorus, saying today that the actor must serve his entire sentence. Twenty years ago, it was Sena chief Bal Thackeray whose efforts helped Sanjay Dutt get bail after he was arrested and jailed for possessing illegal weapons in the 1993 Bombay blasts case.

So senior Shiv Sena leader Neelam Gorhe's assertion in the Maharashtra Assembly today that, "pardoning Sanjay Dutt will set the wrong example; the actor should complete his term," raised many eyebrows. However, speaking to NDTV last night, Sena leader Manohar Joshi did not voice differences with the stand taken by Bal Thackeray or suggest that the Sena's stand has changed.

It is no secret that in 1993-94, Sanjay's father Sunil Dutt, then a Congress MP, had to turn to Bal Thackeray, who was chief of the rival Shiv Sena, for help after his son was sent to prison under the stringent Terrorist and Disruptive Activities (Prevention) Act also known as TADA for possessing illegal weapons.

Both Sunil Dutt and Bal Thackeray are no longer alive, but Sanjay Dutt's lawyer Satish Maneshinde has in an exclusive interview to NDTV, recounted how Bal Thackeray went out of his way to help the actor, for whom the Sena chief had reportedly developed a fondness.

Mr Thackeray, the lawyer said, first got the Sena-BJP government that ruled Maharashtra then to set up a state-level TADA review board, which passed an order in Sanjay Dutt's favour. But the TADA judge rejected the review board's order.

Mr Maneshinde said Mr Thackeray then called up the Congress' Narasimha Rao, who was Prime Minister, to lobby for Sanjay Dutt, the son of a Congress MP. Mr Maneshinde claims he was witness to the conversation, which he says led to the setting up of a central committee to look into TADA cases. The central review committee too recommended bail for Sanjay Dutt.

The actor, who was first arrested in 1993, got bail after spending 16 months in prison in October 1995.The Dutt family has unfailingly acknowledged Bal Thackeray's help. Sanjay's sister Priya Dutt is now a Congress MP from Mumbai North West, the constituency her father represented.

Mr Dutt was arrested again in August 2007 after being convicted under the Arms Act in the case, but spent only 18 days in jail before the Supreme Court granted him bail.

Last week, the Supreme Court rejected the actor's final appeal against his sentence and ordered him to return to custody in four weeks' time and serve five years in prison under the Arms Act. The 53-year-old said he was shattered. The film fraternity rallied around him and Justice Markandey Katju, the chairman of the Press Council of India, has appealed to the Maharashtra Governor to pardon the actor under Article 161 of the Constitution.

Maharashtra Narvnirman Sena chief Raj Thackeray, who broke away from the Shiv Sena seven years ago to form his own party, said he found it "difficult to digest" that "while Sanjay Dutt is being punished those who are actually guilty are out of the country. Be it Dawood Ibrahim or Tiger Memon they are all out of the country. When will they be brought to book? They are happily living abroad."

Promoted
Listen to the latest songs, only on JioSaavn.com
The Shiv Sena's ally, the BJP, has opposed a pardon, saying the law should be the same for everyone.